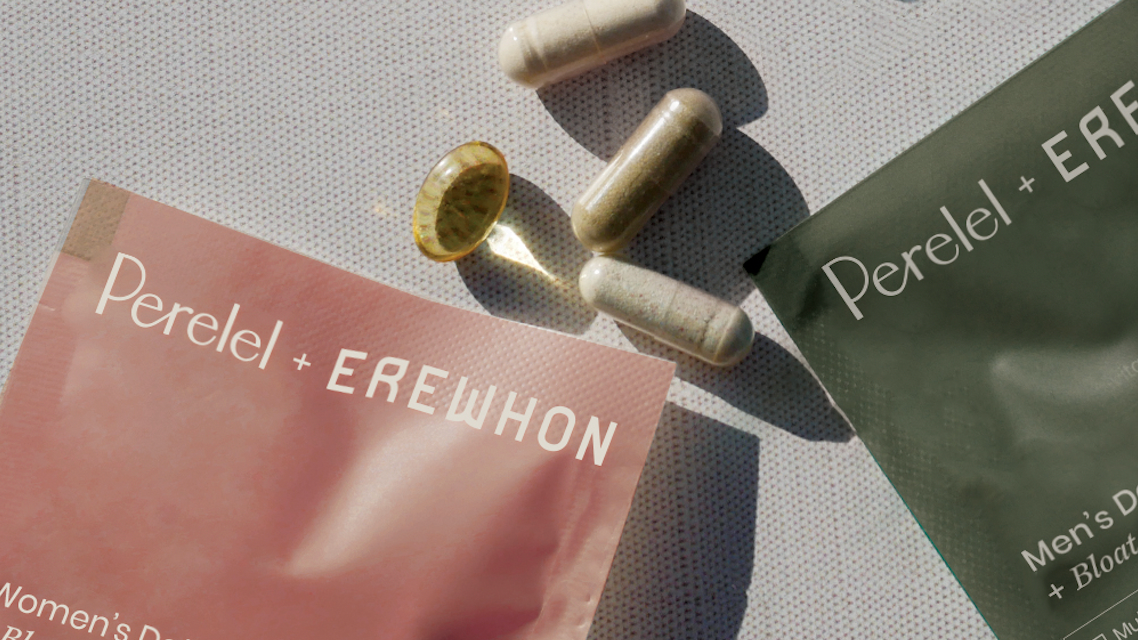 For the first time in its 56-year history, high-end grocery store Erewhon is launching a co-branded product throughout all its stores with direct-to-consumer vitamin brand Perelel.

Although Erewhon has partnered with other brands before, this is the first time it is making a co-branded product available across all eight of its locations, which are all located in California. The cult-favorite grocery store has previously collaborated with Parisian fashion house Casablanca for a special-edition shopping bag and juice. It has also teamed up with jewelry brand Sydney Evan for a limited-edition co-branded jewelry collection in September.

“We were looking to create an easy grab & go vitamin pack that had the full spectrum of daily nutrition essentials,” Maren Giuliano, vice president of health and wellness at Erewhon, said in an email. “The formulation and using the best quality, most bioavailable, and cleanest ingredients were really important to us.”

Perelel is an OB/GYN-founded vitamin brand, which launched a little over two years ago. It offers products like prenatal, fertility and egg freeze support multivitamins and supplements. It raised $4.7 million in seed funding in an announcement in July, and since inception, it has seen double-digit growth month-over-month.

The vitamin brand also offers its own men’s and women’s multivitamins on its DTC site but said it doesn’t directly compete with the Erewhon co-branded products because the latter offers added bloat support. Some Perelel products are also available at Revolve and Goop physical stores. The two co-branded packs are Perelel’s first products available at Erewhon.

“Erewhon has repeatedly told us that many customers spend a lot of time in their vitamin and supplement aisle,” Alex Taylor, co-founder and co-CEO of Perelel, said. She added that there was an opportunity to piece together an entire vitamin routine for customers and a growing interest in offering products that relate to bloating and digestive health. “They really took that into account when we were formulating this product.”

For Perelel, partnering with a retailer like Erewhon allows the company to strategically put its name in front of its target audience. Taylor said Los Angeles is a crucial market for Perelel to win over and being in a grocery store like Erewhon would help the company solidify its position as a trusted health and wellness brand.

“They are the go-to wellness destination and they focus a lot on protecting their brand and their brand name,” said Victoria Thain Gioia, co-founder and co-CEO of Perelel. “It was a big step to put our brand names together.”

Indeed, scoring a spot in a store like Erewhon is much like gaining a seal of approval, said Melissa Minkow, director of retail strategy at digital consultancy firm CI&T. Erewhon has gained a reputation for its trendy and expensive grocery items, but it has also attracted a fanbase of young consumers and health and wellness influencers. Its reputation has made the grocery store a coveted place for startups to sell their products.

“It gives a lot of credibility in the sense that [Perelel] is not the only one selling themselves,” Minkow said. “They’ve shown that they’ve gotten a retailer fully bought in and fully backing the brand.”

Co-branded collaboration has long been a tactic retailers use to generate hype. For example, consumers reportedly emptied racks at Target locations when the retail giant partnered with haute Italian label Missoni back in 2011 for apparel and home products. Then there are collaborations that worked out so well the brands decided to team up for multiple collections. Outdoor brand The North Face and luxury brand Gucci, for instance, launched Chapter 3 in September — the latest release of their ongoing collaboration featuring clothing like jackets and pants.

Minkow said the biggest hurdle for these types of partnerships is to be aligned with logistics as each brand has its own distribution approach and strategy.

Perelel said that, at this point of the business, it wanted to partner with companies that would reinforce consumer trust within the brand. Erewhon declined to comment on whether it plans to do more of these types of collaborations in the future. “We wouldn’t want to jeopardize that by partnering too soon with a retailer that might not have that investment in their merchandising of their vitamin or supplement program,” Taylor said.

“We’re trying to be very protective of that brand and not looking for kind of that initial pop of a wholesale distribution strategy,” said Thain Gioia.