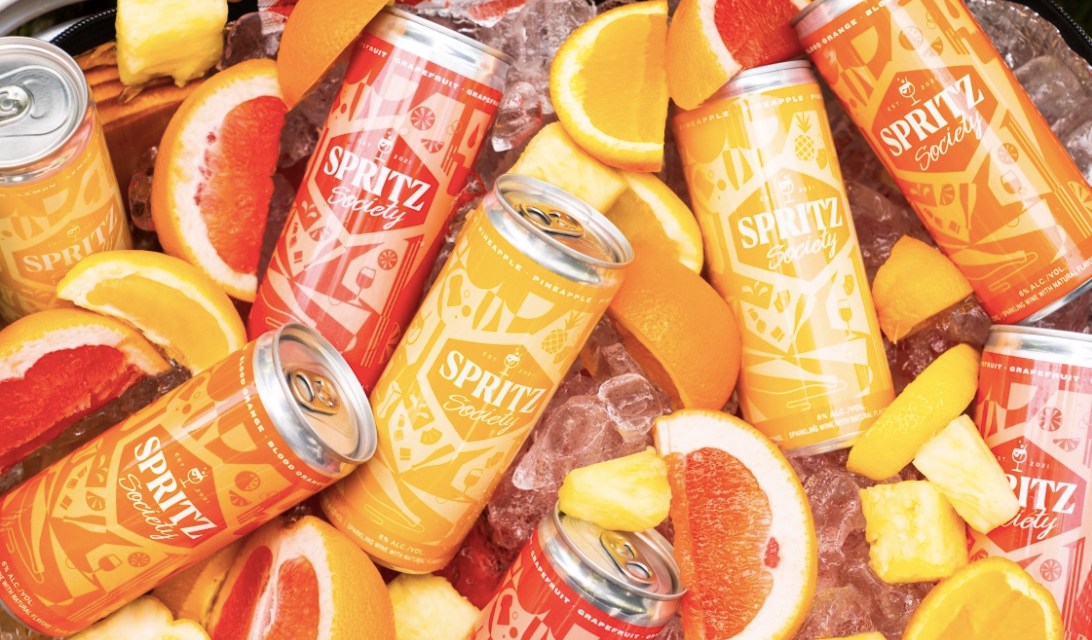 Above all the memes posted on his Instagram page, influencer Ben Soffer has had a new title —  founder and CEO of Spritz Society — written on his bio since last year.

Soffer runs a meme account on Instagram called @BoyWithNoJob, where he garnered around 1.6 million followers. Together with two other founders, Soffer’s wife Claudia Oshry and her sister Jackie Oshry, Spritz Society has a network of about 6 million followers between all of the cofounders’ various accounts. Since its launch, Spritz Society — a ready-to-drink canned cocktail brand — has leveraged the founders’ following to scale the brand.

“We spent the last decade cultivating an audience authentically,” Soffer said. “Because of what we say online, people trust us and our opinions. When we recommend something, they buy it.”

Founded in 2021, Spritz Society sells sparkling cocktails infused with fruit flavors, which are priced at $17 for a four-pack. Soffer and the team often reach out to their followers, asking for their feedback on various aspects of the brand such as flavor and package design. Upon Spritz Society’s launch, the company had garnered so much hype that the company achieved six figures in revenue within the first 24 hours. The company has also raised $3.7 million in pre-seed funding.

Soffer had made a career in the marketing industry while running his Instagram account — working with companies like Marina Maher Communications, VaynerMedia, and Blue Hour Studios — which helped inform how he runs Spritz Society. Instead of simply following certain market data, the company decided to source their own data through social media and launch a brand around its followers’ preferences.

Soffer said Spritz Society’s followers “were key to the product that we launched, and over time, we are continuing to make even point of sale that relates to them and what they love.”

The team put together a Google Form before the company launched to ask their audience for opinions on details ranging from packaging design and brand messaging to flavors and alcohol percentage. Soffer said also he direct messaged thousands of people at that time. Soffer said he continues to leverage his following for data sourcing and for talking about the brand.

Having a following has also helped the Spritz Society establish relationships with distributors and retailers. Soffer said the founders’ network of followers gave the company a leg up when it came to pitching their story and selling the product. Spritz Society is currently available for sale through its own direct-to-consumer website and about 400 wholesale stores, such as Total Wine & More, BevMo! and Specs stores, among other independent liquor shops.

Social media platforms like Instagram and TikTok have become indispensable tools for growth among startups. Nadya Okamoto, CEO of period care brand August, has utilized her over 3 million followers on TikTok to grow brand awareness. Meanwhile, a viral video of Peace Out’s products has allowed the company to sell as much as six months’ worth of products within 24 hours.

“Social media is the largest crowdsourcing of public opinion in human history,” Ryan Detert, CEO of influencer marketing firm Influential. “If you can structure that and make sense of it, you can, for example, improve a product.”

In Spritz Society’s case, the company used its network to launch its latest summer flavor, peach, which went on sale in June. The flavor was chosen using the same method Spritz Society used to launch the brand: Spritz Society sent out an email to shoppers asking them to choose between four flavors.

Kimberley Ring Allen, founder of Ring Communications and professor at Suffolk University, said that having a founder who is also an influencer can lower a brand’s customer acquisition costs. This could, in turn, raise the company’s profit margins.

“The ready-to-drink market is skyrocketing. It’s very, very cluttered. There’s no shortage of vodka sodas, canned tequila, canned margaritas, things like that,” Allen said. “If you’re starting out with no awareness, you’re going to have to grind your way to the top.”

The founders also hold meet and greets in the stores of its various wholesale partners, which Soffer said gains a lot of engagement on social media. The other two founders, Claudia Oshry and Jackie Oshry, co-host their own podcast called The Morning Toast, which reaches a million listeners a week, Soffer said. Claudia, also known as @GirlWithNoJob, has over 3 million followers on Instagram and is a comedian, while Jackie has around 270,000 followers on the app.

However, Allen said being a public figure also opens the door to criticism and people digging up past mistakes. “Everything you do is under a microscope,” Allen said. “There’s very little [you’re] able to hide if you’re an influencer and you’ve built your following on social media.”

Soffer said he never planned to pursue being a content creator as a full-time career. Though he still enjoys making content, running Spritz Society is now his focus.

“Spritz Society is my thing. Now if you go to @BoyWithNoJob, everybody knows that it’s my only job,” he said. “Unfortunately, it’s led to less memes or less time to post memes.”