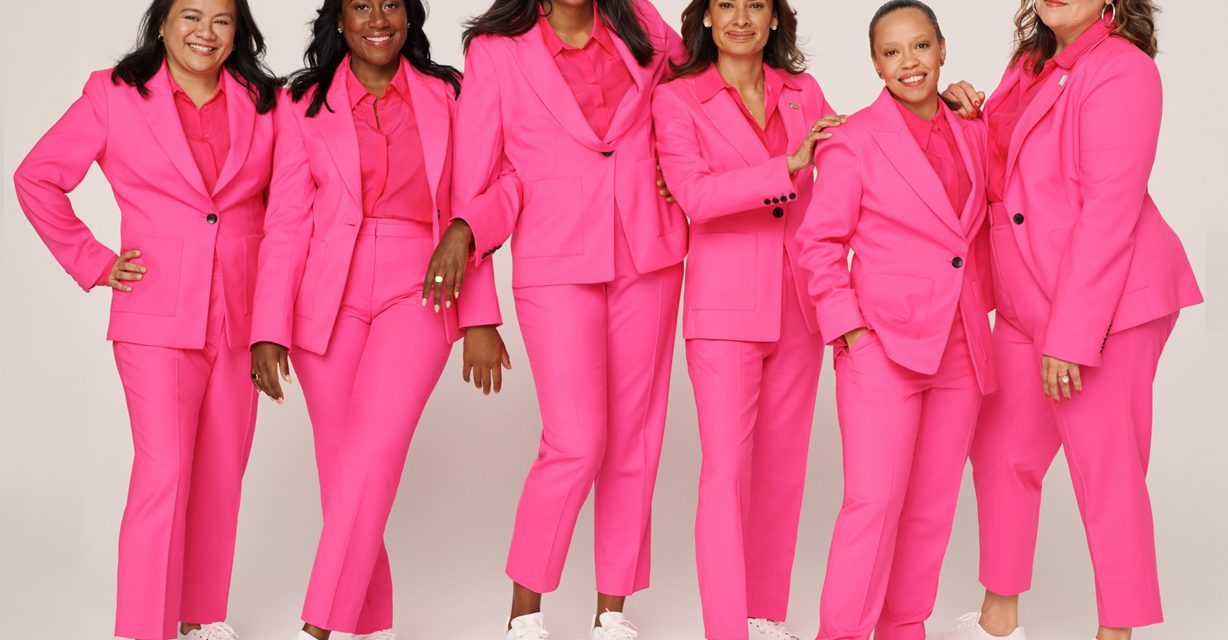 At first glance, a hot pink power suit might not seem to be have anything to do with politics. But for women’s workwear brand Argent, the ensemble is meant to send a message of women’s equality, and support the cause with every purchase.

During the 2020 election, Argent sold the suit in partnership with Supermajority, a women-focused voter outreach organization that received 10% of the proceeds. The line sold out within 24 hours. This year, the two organizations teamed up again for a New York City pop-up shop to relaunch the collection on National Voter Registration Day. The “Voting Suits You” campaign continues on social, with Hillary Clinton, Katie Couric and Busy Phillips participating.

“A partnership like this allows Argent to participate in a cultural moment, showcasing exactly what the brand stands for, women’s equity and bold confidence through clothing,” Argent founder and CEO Sali Christeson told Modern Retail.

Argent is one of a growing number of brands that’s not afraid to put its politics and beliefs in its marketing and messaging. And while such moves may alienate some customers, brands like Argent and The Body Shop are seeing benefits like increased sales, new customers and higher engagement following these campaigns.

The penchant is hardly new, but it has increased in recent years amid the Black Lives Matter movement, 2020 presidential election and the U.S. Supreme Court decision overturning Roe v. Wade. In February 2021, The CMO Survey from Deloitte and the American Marketing Association found nearly 28% of marketers said it’s appropriate for brands to take a stance on political issues — the highest since the survey started in 2008.

And for some, it means good business. Upon launch of this year’s campaign with Supermajority, Argent saw a 50% bump in website traffic, plus 2.5 times more sales than the week before.

“Brands in the past have had the luxury of being hands-off when it comes to political topics, and consumers demand more now,” said Christeson. “It reflects a level of authenticity, and drives a sense of loyalty in a way that makes it worth it. I’d rather have a mission-aligned audience than be neutral on just all things.”

Consumers are increasingly looking to companies to be upfront about their values, said researcher Maryclaire Manard, founder of Cluey, an online platform where people look up brands’ campaign donations and other environmental, social and political actions.

“The rise of transparency, and the digital information age, have all fueled this ultimate outcome of companies not being able to stay as quiet or closed-lipped on certain issues that may really impact their various stakeholders,” she said.

Cluey data shows that 61% of users say the political impact of their purchases matters to them. And that trend shows no signs of slowing.

”It’s only going to grow as members of Gen Z grow into their consumer power, have higher disposable income as they get into their late 20s and early 30s,” Manard said.

When a company does decide to be vocal about its social or political values, it can pay off with customer loyalty, Manord said. Brands like Ben and Jerry’s, Patagonia and Dr.Bronner’s have long been embraced by consumers who share the companies’ environmentally conscious values.

“The consumers who share those values and who love those brands, they’ve only become more loyal to those brands as a result of that,” she said.

Committing to a stance

If brands choose to advertise their political views, it’s incumbent upon them to go beyond the PR effort, Manord said.

“If they’re talking about the importance of getting out and voting, are they having policies internally that allow their employees to take time off as needed to get to the polls?” Manord said. “Are they walking the walk, in addition to talking to talk?”

REI, for example, announced this year that it will delay the opening of stores by two hours to give employees paid time off to vote. The outdoors store, known for its co-op structure, also put together voter guides with candidate stances issues around the environment and the outdoors — though it maintains that its a nonpartisan brand and it does not make endorsements.

Andy Rose, content and advertising expert who serves as vice president at creative content production agency dPost-dStudio, said consumers have been online long enough to sense when a sentiment isn’t authentic — like when a customer calls out a company for greenwashing.

“Everybody can tell when you’re just trying to get a couple vanity clicks and some likes,” Rose said. “If a brand really firmly believes in its gut that they have to say something political, then they need to step up to the plate and swing for the fences.”

For example, when football player Colin Kapernick was featured in Nike ads after kneeling during the national anthem to advocate for racial justice, #NikeBoycott began trending. In turn, shares fell. But the move also endeared other customers to Nike further with a boom in sales.

Encouraging voter registration and voting is among the most common civic value brands are willing to advertise. The CMO Survey found that 93% of marketers thought it appropriate for brands to encourage voting. Snap, for example, says it helped 1.2 million of its users register to vote in 2020. This year, it launched a new feature that allows 16- and 17-year-olds to pre-register in states where that’s an option.

“We’re excited to build on our efforts to help continue to empower young people to get involved in civics and to empower them to build on the recent growth in youth voter turnout,” the company said in a news release.

But there’s some lines brands aren’t willing to cross. Other findings from The CMO Survey in February 2021 include:

Brands that aren’t vocal about political or social stances in marketing still might be active in the inner workings of politics. And this is hardly a new development; corporate donations have made up a large portion of campaign donations since the 1940s, Manord said.

This election cycle, business interests and brands like the National Beer Wholesalers Association, AT&T and Home Depot crack the top 20 of donations to political candidates, according to Open Secrets.

“Under our current rule of law in the United States, corporations are afforded certain constitutional rights, allowing them to wield influence on political and regulatory systems via lobbying efforts and campaign contributions,” Manord said.

Skin and cosmetics company The Body Shop has intertwined activism and policy into its operations and marketing for more than 30 years. In August, it launched the Be Seen.Be Heard global campaign in conjunction with the United Nations.

The goal is to center young people’s voices in policy discussions; in the United States, that’s manifested as getting first-time voters to register. Hilary Llyod, vice president of marketing and corporate social responsibility for The Body Shop, told Modern Retail in an email that while the brand has a rich history of activism, it’s focused on engaging younger voices.

“We know we’re an activist brand with a rich history of fighting for what’s right, but we have a lot of work to do to make sure we’re understood in this way by our young customers,” Lloyd said. “We hope Be Seen. Be Heard. is an important step in this direction.”

During the week of National Voter Registration Day in September, the campaign’s landing page saw a 900% increase in traffic. That traffic drove 55% of registrations that have been made so far. The campaign continues with advertising “ACT Stations” in stores where shoppers can write down what issues matter to them and post them on a collage-style board.

At Argent, political messaging and aligning with activist causes help the brand reach new audiences, Christeson said. This year, the brand designed a sweatshirt emblazoned with the message “Your Vote, Her Future” with proceeds supporting Michelle Obama’s organization “When We All Vote.”

Not only does this help introduce Argentt to new customers, Christeson said, but it sends a message to its current shoppers that the brand lives its values. Argent also frequently dresses women with high-profile jobs in politics, tech and entertainment, and Christeson said that clientele is selective about what brands to wear.

“A lot of public folks consider the brand that they’re wearing,” Christeson said. “They want to know, ‘Is it female founded? Are they producing domestically? Are they sustainable? Is it values aligned? Are they espousing causes that I care about?’”

And if going down that road leads to lost customers, Christeson sees it as a way to refine the customer base.

“We absolutely know that being pro-women and leaning into being pro-women benefits us all day long,” she said. “So are we okay alienating folks that see that as a negative? Yes.”