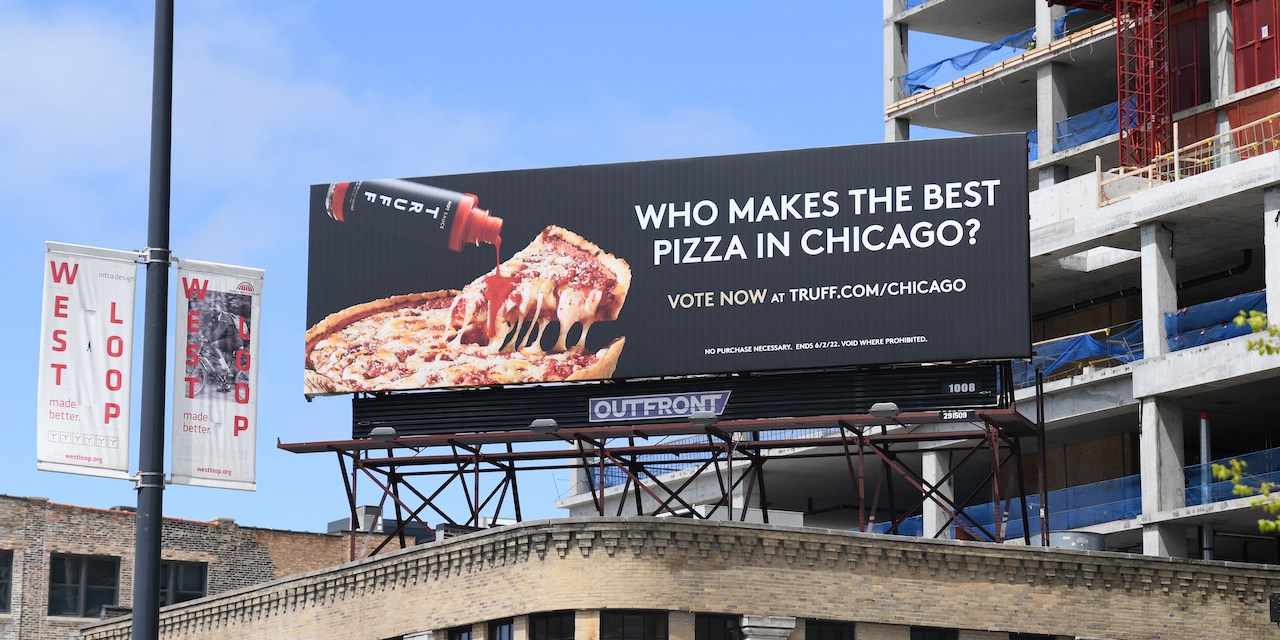 More brands are trying to get creative with out-of-home advertising.

One such brand is hot sauce maker Truff, which has been on a run of city takeovers over the past few months. The campaign consists of multiple city-wide activations – including billboards and influencer promotions, encouraging locals to argue over their favorite local restaurant.

In Chicago, for example, Truff asked its followers to choose who makes the best pizza in Chicago, prompting fans to vote for their favorite participating restaurant on Truff’s website. By the end of the month-long contest, Truff announced the winner both on its own social media feeds and through a local news segment.

Truff, which was founded as a DTC brand in 2017 and currently sells at over 15,000 retail locations, is new to offline marketing. According to the company, Truff is using these localized “food fights” to drum up regional buzz and indirectly drive traffic to its website and social media feeds. The #TruffBest campaign kicked off with Philadelphia last fall, and moved into Chicago this month, with plans to launch in other cities later this year. So far, Truff has seen a sales lift in the cities it’s run these campaigns in; over the past month Illinois went from Truff’s sixth most popular location for DTC sales to its top state.

The first iteration of the contest focused on Philly cheesesteaks. Truff’s campaign ended up crowning John’s Roast Pork as the winner. As part of the contest, locals voted for their favorite cheesesteak spot, with the winner receiving $10,000 in cash from Truff.

Nick Guillen, co-founder of Truff, told Modern Retail that most of the company’s marketing has been digital-focused for the past five years. “We started as an Instagram account even before we launched our first sauce,” he said. “We do an incredible job online, but now we’re just getting into advertising Truff products offline.”

A robust out-of-home campaign was the next natural step, Guillen said. “But we wanted to do it in a way that creates conversation and even maybe a little bit of controversy.”

“We had to work with billboard companies to target the right audience, including specific neighborhoods we foresaw high engagement,” said Guillen – spots included a prominent corner in Philadelphia’s Fashion district. “We also worked hard on getting the restaurants involved, which is important for creating passionate engagement among locals.”

One local collaboration to promote the contest consisted of a cheesesteak tour with Philadelphia’s streetwear store P’s & Q’s. The event featured Eagles wide receiver Jalen Reagor, and took place during Expo East, “so we had a big network of food people in town for it,” Guillen explained.

This past week, the brand wrapped up its latest installment in the series, revolving around Chicago’s best pizza. actually wrapping up an OOH campaign in Chicago where the contest asked “Who makes the best pizza in Chicago?” To support the Chicago OOH billboards, Truff released two content series in tandem with the contest, oneof them being a YouTube pizza tour by Number Six With Cheese featuring different styles of pizza, including the famed deep dish.

All of these marketing components helped create a cohesive Truff “takeover” of each city’s food scene, said Guillen. It also got restaurants naturally promoting the Truff contest in hopes of winning cash and receiving bragging rights. “One restaurant even handed out free pizza to get customers to vote for them,” Guillen said.

Truff has an in-house content development team, which tries to bring its playful social media voice to physical marketing.

“There’s a lot of research that goes into it and a big part of it is researching engagement online,” said Michelle Gabe, Truff’s director of marketing. The marketing team scours YouTube comments and Reddit threads to better gauge potential virality, both online and for localized campaigns, Gabe said.

Truff called on local food influencers to go on shopping hauls to buy Truff products alongside their other favorite brands at their grocery store. Some creators went to review the pizzas as part of the campaign promotion.

“We also did a lot of print collateral where we even made a custom page for restaurants to download postcards to put in delivery orders or other places,” Gabe said. “We found these to be extremely efficient tools to get the word out there.” By the end of the campaign, the Chicago contest garnered over 12,000 votes.

Brian Rappaport, CEO of Quan Media Group, (which worked with Truff on its OOH campaigns), said that with out-of-home marketing becoming competitive, brands are trying to stand out with creative campaigns.  “We’re seeing more brands testing out-of-home for the first time,” Rappaport said. “We did 75 out-of-home campaigns this year, and one-quarter are first-timers.”

Barry Frey, President & CEO of the Digital Place-based Advertising Association (DPAA), said that more than ever, retailers and brands “are getting innovative and creative with their spaces” by utilizing screens and local activations to engage consumers and market their brands. “This is the leading edge of digital out of home in the omnichannel environment,” he said.

“I think brands like Truff use out-of-home in a smart way, so it’s not about spending the most money but being hyperlocal and effective,” Rappaport said.

For Truff, part of testing the out-of-home channel is about blending its digital marketing with the offline awareness that out-of-home brings. This means creating collaborations and user-generated content that can be easily cross-promoted through the brand’s in-person and online campaigns. The ongoing city-focused food fights is an example of this, Guillen said. At the same time, Truff is trying to tailor its messaging based on each channel’s audience. “There isn’t one strategy that works for every channel,” Guillen said. “For example, we find that trolling people on TikTok gets the highest engagement rate for us.”

The brand will be rolling out similar brand collaborations and campaigns in the coming months, Guillen aid. “There are a lot of great local food scenes we can tap into,” he said. The brand also has to find a dish that pairs well with its products. “But it’s important to find the right fit – which depends on local demographics and our retail presence.”