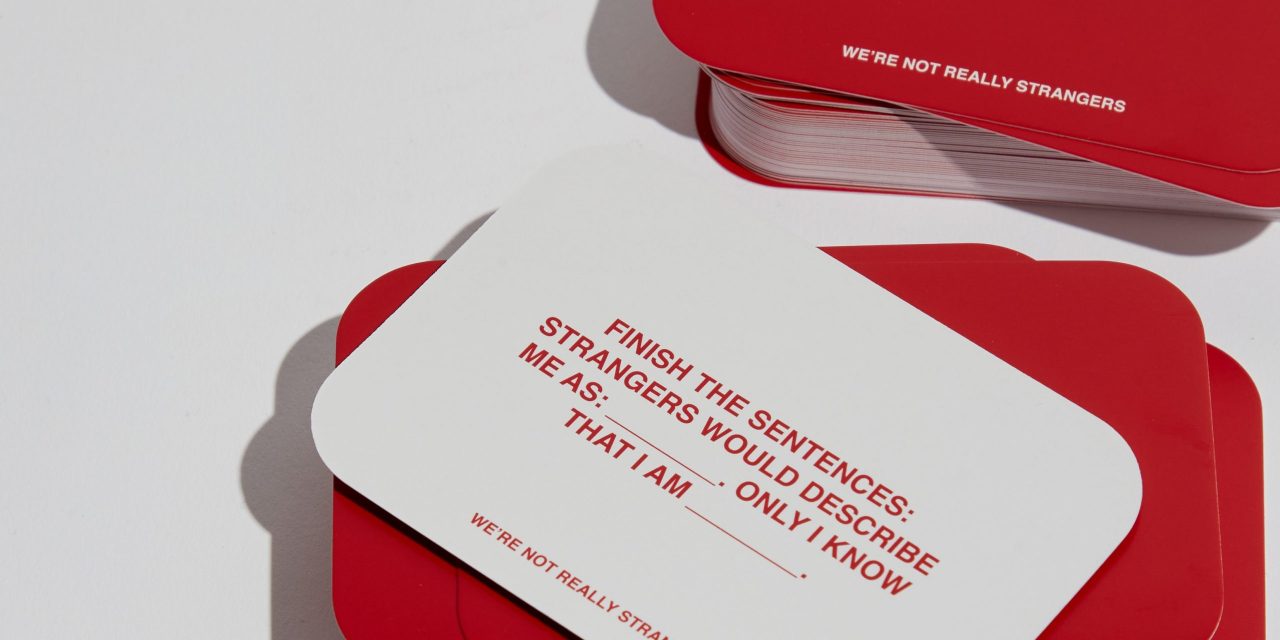 One of TikTok’s breakout stars is a mental-health-focused card game called We’re Not Really Strangers.

Over the last 12 months, the game has amassed nearly 3 million followers on the app. Meanwhile, WRNS accrued 336 million views on posts made directly from its account, compared with just 73.5 million views on posts using its hashtag. In other words, WRNS gets more than 4.5 more TikTok views on its account versus on other people’s. While the company declined to share revenue numbers, a recent analysis of how DTC brands use TikTok from the newsletter Nexttbrand ranked WRNS as the 21st most popular company in its ranking — behind much more established names like Colourpop and celebrity brands like Kylie Jenner’s Kylie Cosmetics.

“It definitely reflects what we do in the core game,” said Jessica Potts, the company’s VP of digital and e-commerce, in regards to its TikTok presence. Crafting content for TikTok or Instagram, she said, “isn’t always this buttoned-up, clean experience” — just like the game itself, she wants it to feel conversational.

As a game, We’re Not Really Strangers is premised on getting to know friends or loved ones more intimately: players will pull cards that ask questions about themselves, like, “Do I seem like a coffee or a tea person?” On TikTok, WNRS weaves a focus on mental health into its videos, counseling followers on self-care and self-worth — all core components of the game itself. Videos focus on self-care-related messages; one typical video zooms in on a sign on the street that says, “Loving them shouldn’t hurt you.” Updates about the game make occasional appearances, but the company’s TikTok account focuses predominately on content around self care and mental health.

Potts said that the company, despite its massive reach across both Instagram and TikTok, tries to keep its content spontaneous. A small team is constantly supplying the posts, and while at times they might informally solicit and pitch ideas for the next batch of videos, Potts said that often their posting ideas arrive on their own schedule. “Sometimes it’s at midnight and I get a text like, ‘okay, I have an idea,’” Potts said. “We flesh it out together really quickly, and then it’s up.” Overall, she said, WNRS videos range from a “quick video we think about in just 5 seconds and we just make it and it’s up” to “ones that take a longer-tail thought process to build and navigate through.”

When a video goes viral, she said, the company sees the direct impacts on their products. The company wouldn’t disclose much growth data with Modern Retail — emphasizing that the purpose of its videos are to build community — but WNRS did share that one recent viral TikTok video catapulted sales of a particular product up 950% compared to the day before.

According to Sasha Silko, who runs Nexttbrand, We’re Not Really Strangers is, along with beauty brands like Starface and Doe Lashes, one of the DTC brands with an outsized presence on TikTok compared with its general name recognition. What’s more, WNRS has created a successful brand account largely through its own content, rather than relying heavily on a network of paid influencers to boost its numbers.

TikTok’s ability to turn a product into a viral sensation is well-documented. One of Amazon’s most-searched products last month, for instance, was “TikTok leggings,” in reference to the pair of pants that went viral on the app. But sustaining a TikTok presence is more complicated — and while established retail chains like Chipotle have had little trouble pulling it off, for DTC brands, the opening is narrower.

A card game might not seem like a natural fit for a video-focused platform like TikTok. According to Silko, many of the top DTC brands on TikTok operate in the beauty or apparel space — both of which lend themselves well to such a visual medium. “People showing off makeup, hair extensions, lashes, that goes off really well,” she said. Beauty brands have also come to dominate other niches of TikTok, including the “strangely satisfying” subculture: beauty brands like Florence by Mills, Glossier and Milk have become masters of turning the process of applying makeup into ASMR. It’s hard for a card game to replicate that model.

Focusing on a theme rather than a product has become a popular strategy for companies on TikTok. The candle brand Homesick, for example, dedicates much of its feed to tips on how to become a better candle owner, for instance, including how to maximize burn time — just as WNRS has devoted itself to promoting empathy and mental health. “It’s these products that don’t naturally lend themselves to video, to someone using it on video, so what do you do instead? You have to find other ways to resonate,” said Silko. “It’s not a fun product to watch someone use, it’s a candle.”

WNRS, for one, has spun out its mental health focus across several channels. It also sends texts to customers, which, in place of product updates, feature reminders like, “Be nice to people, we’re all just trying our best.”

According to Silko, the company’s focus on mental health seems to have resonated with audiences, especially during lockdown. They’ve found a way to say, as Silko put it, “our content is going to be about that and not about selling products to you.”