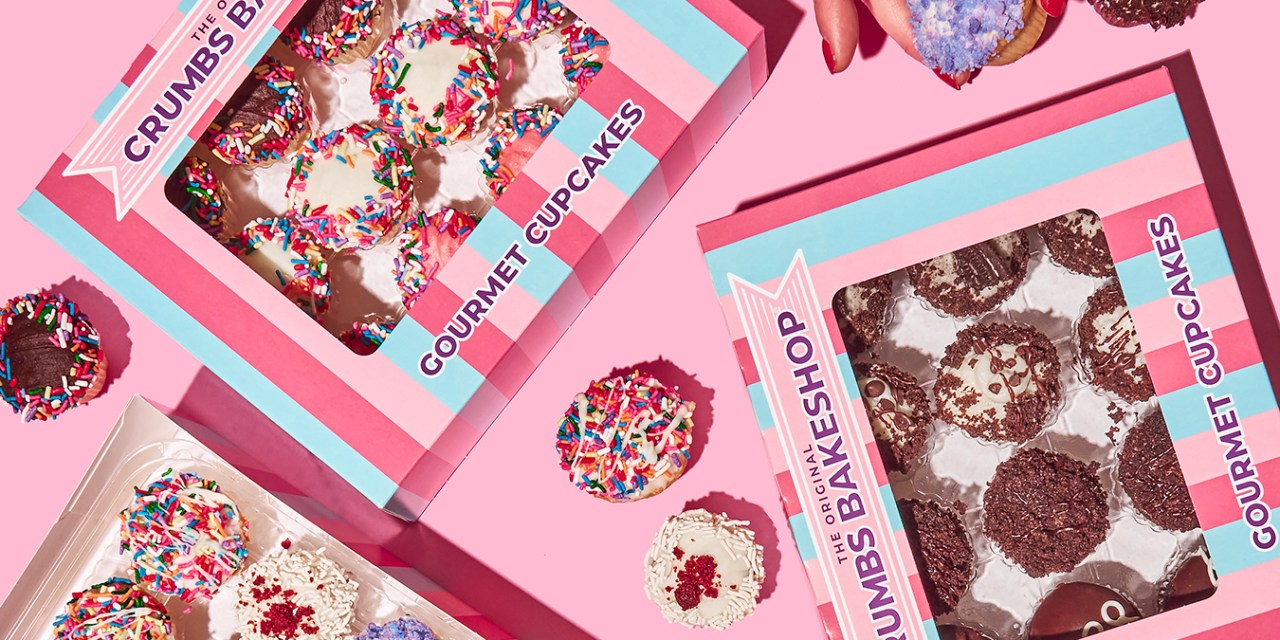 The bakery chain, which at one time had about 50 stores across the country that were selling millions of cupcakes a year, is bringing back its signature cupcakes nearly a decade after closing shop.

Instead of a brick-and-mortar approach, however, Crumbs is implementing a digital-first strategy. This month, Crumbs Bakeshop is relaunching past fan favorites like the squiggle, red velvet and cookies and cream cupcakes — all of which will hit several grocery chain shelves across the Northeast later this month. To build on its dessert offerings, Crumbs is also debuting a line of jarred cookies. The company is also launching nationwide delivery through its website, along with local same-day delivery via ghost kitchens. The strategy, according to the founders, is geared at harnessing older customers nostalgic for Crumbs.

The bakery was started on the Upper West Side of Manhattan back in 2003 by husband and wife Jason and Mia Bauer, who exited the company in a SPAC deal in 2012.

By 2016, all Crumbs locations had shuttered, and the brand effectively went away. This was caused by several challenges following the takeover, which made it difficult to sustain the chain’s early hyper growth. These include a declining interest in cupcakes, first made famous by pop culture mainstays like “Sex and the City” around the time Crumbs first opened. Another hurdle was the rising real estate costs, which made many of the centrally-located Crumbs stores too expensive to run profitably.

Despite this saga, free time during the pandemic reignited the duo’s excitement for selling sweets again.

“The break gave us a lot of time to miss the operation, and we realized it still holds a special place in a lot of people’s hearts,” Jason Bauer explained.

“At the same time, the pandemic had me baking again and I was missing the day-to-day of running the business,” said co-founder Mia Bauer, who heads up the baking operations.

“The truth is it’s our baby, and it hurt us to see the brand suffer in the past,” Jason Bauer said. “So we have high hopes of revitalizing it.” Last year, he said they had the opportunity to re-acquire the brand, and so they’ve been working on the relaunch ever since.

However, with nearly a decade passing by, Jason Bauer said a lot has changed in the bakery and dessert landscape. For one, there is the rise of e-commerce, and with it the online bakery boom. Over the past few years, online bakeries like Last Crumb and Wunderkeks have gone viral on social media for selling out of their sought-after cookies. These days, he said, customers expect to be able to order their favorite food brands online or pick them up at a local store at their convenience.

And so, the co-founders outlined a three-vertical strategy for the Crumbs relaunch, all based on current trends. Many of the original cupcakes still have the same recipe and look — with a few tweaked ingredients to tap into the nostalgic taste people have for Crumbs. But the fulfillment will differ greatly.

“We’re reaching people through multiple ways,” Jason Bauer said. These channels are direct-to-consumer shipping, a CPG line sold at grocery stores and a ghost kitchen partnership to fulfill orders on delivery apps like DoorDash and UberEats.

This means that instead of opening up a series of bakeries like they did in the past, the Bauers have invested in setting up a commercial facility — the first in New York, with more to come — alongside several fulfillment strategies — including same-day delivery and grocery packaging. The packaged cupcakes and cookie line will roll out at hundreds of major retail locations, such as Fairway, Westside Market and ShopRite.

“We’d always had unique packaging with our clear bags that show the cupcakes,” Mia Bauer said. To replicate the look, Crumbs Bakeshop is merchandising the grocery line in clear boxes that showcase the products. And for the first time, the company also had to figure out nationwide shipping ahead of the launch. “Over the past 18 months, we’ve been shipping products to ourselves to test packaging that protects the products,” she said.

Finally, a partnership with ghost kitchen operator Reef will handle the same-day delivery channel. “We were already sort of a ghost kitchen when we operated the bakeries,” Jason Bauer explained. In the past, all Crumbs baking was done at anchor facilities, with daily batches delivered to nearby stores.

“That helped us keep taste and texture consistent at every location, and is one of the tactics we’re recreating this time around,” Mia Bauer said.

The anticipated comeback has the advantage of a brand awareness foundation, the founders said. “We’ve awakened the crumbs community by announcing the comeback earlier this year,” Jason Bauer said.

However, the new strategy also required them to learn and apply new marketing tactics in ways they didn’t have to in the early 2000s. “So many of these channels barely existed back then,” Mia Bauer said. “We were limited to our local stores for reaching our neighborhood customers.”

Now, the brand is investing in paid digital advertising to spread the word about Crumbs’ return. Over the past few months the company has been testing social media campaigns, on platforms like Instagram and Facebook, to drum up buzz before ordering became available. Crumbs is also starting to work with some of its upcoming retail chain partners on advertising on their networks, including in-store, website and social media ad placements.

Crumbs also says it is in the process of creating an ambassador and influencer program, in hopes of capturing a share of the online bakery market, Jason Bauer said. “We’re pulling out all the stops, including an activation featuring a New York City food truck in the coming weeks,” he added.

Of course, the relaunch does not come cheap, especially given CPG production and shipping components. The co-founders confirmed Crumbs will be raising a seed round of capital in the coming months in order to support the multi-channel debut. At its height, the company had 700 employees and was selling a million cupcakes a month across 14 states. “Now it’s us two and a few advisors helping us with operations and social media,” Jason Bauer said.

An already-crowded field means having to compete with a slew of younger, digitally-native brands. The trick for these brands is to capture the nostalgia of their heyday, while also courting the younger audience that wasn’t around for their first iteration.

Chad Lusk, senior director at Alvarez & Marsal consumer retail group, said that CPG brands far and wide are seeking new ways to reach younger shoppers in hopes of staying relevant to the next  generations with the largest buying power. He pointed to the rise of Gen Z’s affinity for early 2000s fashion and pop culture as factors that will continue to fuel brands’ comebacks. “Fortunately for legacy brands, nostalgia plays a large role for younger generations today,” Lusk said.

This will be the big challenge for Crumbs — trying to establish itself as a leader in the novelty dessert industry.

“Overall, our goal is to recapture the presence we had at our height,” Jason Bauer said. “There are fans out there, so we need to let them know we’re back.”