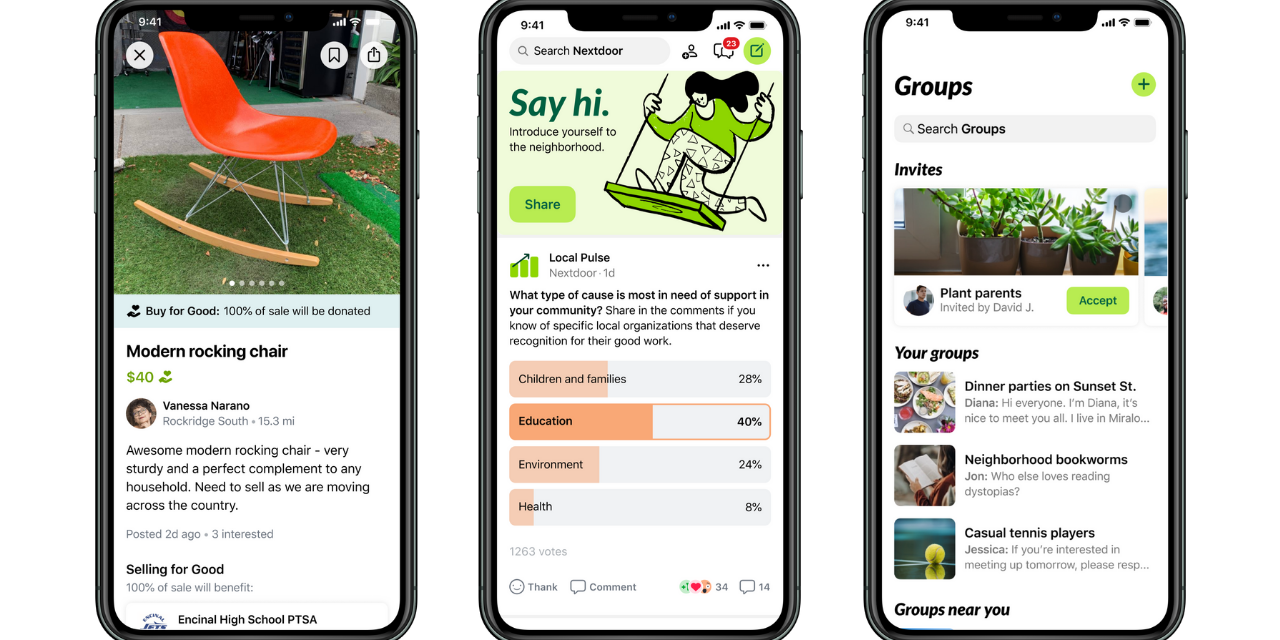 Nextdoor’s ad business is gaining traction in the grocery space.

The company boasts a network of tens of millions of users, all of whom have signed up for the platform through verified home addresses — a critical piece of information for any brand with a hyperlocal focus or marketing strategy. And as retail brands migrate their ad dollars toward commerce-focused sites like Amazon or Instacart, or up-and-coming social apps like TikTok, outlets like Nextdoor are also getting a second look. Brands like Stop & Shop, Imperfect Foods and Hershey’s have all invested in Nextdoor ads over the past year, and the social platform is especially gaining interest among grocers looking to run heavily local campaigns.

“Nextdoor has really strong hyperlocal geo-targeting capability where we are able to target by zip code,” said Melissa Brandle, the growth marketing analyst at Imperfect Foods, a grocery delivery service focused on reducing food waste. That was useful because “we are not yet a national brand, and we service specific zip-code areas and markets.” Imperfect Foods initially started running ads on Nextdoor in the third-quarter of 2020, largely as a test to see if the social platform was worth pursuing. “We were really trying to diversify our digital media mix,” she said.

Brandle also pointed to a few localized features that she believes gives Nextdoor a leg up over other data-rich competitors, like the Facebooks of the world, including a feature in which Nextdoor ads can dynamically insert the name of the neighborhood or city where a user lives. “I haven’t seen other advertisers able to do [that],” she said. “It increases the relevancy of that ad to that user.”

Nextdoor is still relatively new to the advertising space. The company launched its ad network in 2017, and quickly proclaimed that it expected to hit $1 billion in ad revenue by the end of 2020. While the company does not disclose its current ad revenue figures, the company announced in October 2020 that it was exploring an IPO, and was striving for a valuation of between $4 and $5 billion.

“Our advertising network is absolutely a priority,” Heidi Andersen, Nextdoor’s head of revenue, said in an email to Modern Retail. “With Nextdoor focused on home, we have a direct line to decision makers and are increasingly seeing success with CPG brands looking to reach the household decision maker.” Andersen pointed to a campaign that Hershey’s ran on Nextdoor during Halloween, in which the company promoted candy and saw add-to-cart clicks and sales 140% above Hershey’s benchmark. (Andersen did not give exact figures.)

Also boosting its use case is the rise of the Nextdoor marketplace, called Finds, which — while still far off from the scale of Facebook Marketplace — has turned Nextdoor into a platform where people increasingly think about buying and selling goods. Andersen said that, on Nextdoor, users “are intent driven and looking to take action — purchase, sign up, etc. in the immediate near term.”

Nextdoor is not an entirely risk-free platform. It has a reputation for hosting arguments between neighbors, which can at times turn ugly. Brandle noted that while Imperfect Foods had turned off comments on all of their ads, she said she wasn’t any more worried about Nextdoor from a brand safety perspective than she was with other social platform.

Ryan Craver, founder of the e-commerce agency Commerce Canal, told Modern Retail that Nextdoor has increasingly pitched itself to brands, including those in the grocery space. “The majority of the brands we represent, they’ve essentially pulled back from Facebook and said go find exposure for your brand elsewhere,” he said, adding that Instacart and Nextdoor in particular have become popular new channels. Nextdoor, he said, “is definitely trying to get their name out there” among retail brands.

The platform seems to have garnered a lot of interest among grocery brands because, as Brandle of Imperfect Foods said, “grocery is very local.” In a survey from April, Nextdoor found that 40% of its users have purchased groceries in the last month.

While Nextdoor does not yet represent a big portion of ad spend at Imperfect Foods, Brandle said the company was happy with the results and is continuing to invest throughout the year. Brandle said that the average order value of a customer acquired through Nextdoor ads was “slightly higher” than the AOV for customers from other ad channels, although she didn’t disclose exact numbers.

Additionally, she said Nextdoor has proved itself as an advertising platform as Apple new privacy features tighten ad-targeting capabilities for brands. “Because our targeting is solely based on Nextdoor’s first-party data, we actually haven’t seen an impact from iOS 14,” she said.