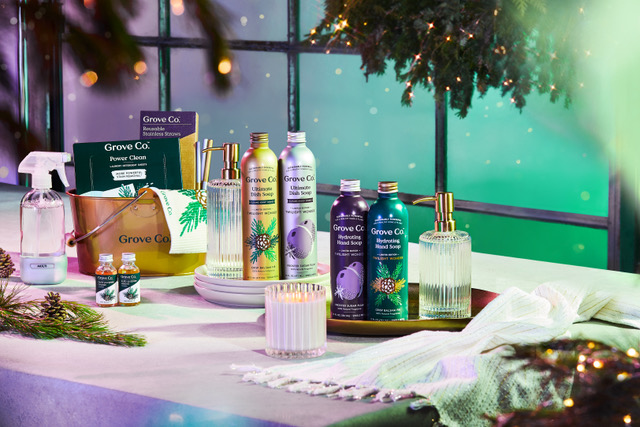 “There’s never been a real scaled-up natural products company. They all get taken out by the big guys,” he said. “Our company’s aspiration is to be that important in the industry. And in order to do that, we need to get a lot bigger.”

The expansion plans come about six months after the company went public in a deal with Virgin Group. It’s also seen steady retail expansion:  In April 2021, Grove made its first retail launch at Target, and since then it’s expanded to more than 4,000 stores nationwide. Recently inked distribution deals include CVS, Harris Teeter and H-E-B.

The growth spurt is beginning to show signs of paying off, though the company has yet to hit profitability. In its third-quarter earnings report last week, it reported a loss of $9.6 million, down from a loss of $31.1 million the same time last year. Still, the company upped its projected net revenue for the calendar year from $302.5-312.5 million to $313-320 million.

Launched in 2012 as a DTC brand, Grove made a name for itself by offering products that aim to lessen reliance on plastic, like cleaning concentrates and accompanying glass bottles. Newer products include shampoo bars from its in-house personal care brand Peach, launched in 2020. Its online marketplace has grown to include about 150 brands, with Grove’s own brands making up about 47% of net revenue.

To continue its growth trajectory, Grove is betting that consumers will increasingly become conscious of their environmental impact. Morning Consult found in its September 2022 Sustainability Report that more than half consumers are “very” or “somewhat” concerned about the environmental impact of product manufacturing, while six in 10 shoppers are concerned about retail’s role in climate change. Meanwhile, the natural household cleaners market is expected to grow at a CAGR of 11.1% through 2025, according to Grand View Research.

In response, Landesberg said that Grove has an opportunity to partner with other businesses in order to drive more sustainable shopping trends while bolstering the bottom line.

“We and HumanCo share a belief that over the next decade, the trend towards natural and sustainable products is obvious and inevitable, and the current trends in the market don’t necessarily reflect that,” Landesberg said.

Landesberg said he is fairly agnostic about what products he’d like to see added to Grove’s roster, as long as they are committed to the same principals as Grove.

There isn’t necessarily a target for how many deals will go through, or what kind of business needs the smaller companies may have. But the companies will be able to get direct financial support, then scale by selling on Grove’s platform, Landesberg said.

“If we want to buy a business, and it needs $50 million to get to profitability, we can do that,” Landesberg said.

Assil Dayri, a brand identity expert who runs AMD Consulting Group, said Grove has an opportunity to continue to launch sub-brands of different names, becoming a parent company like Nestle or Unilever. But doing so successfully requires building customer loyalty, ensuring existing customers continue to support the brand and playing the long game.

“Acquiring new customers is very challenging. But if they can retain the existing customer and increase their lifetime value, that’s something that will bring in a higher value in the long-term,” he said.

Grove’s growth is also contingent on the physical retail environment, as online spending appears to be waning: Grove saw 1.46 million active direct-to-consumer customers in the third quarter, compared to 1.71 million in the same time period last year. Net revenue per order was $60.63, up from $56.43 in the same time last year.

To grow in stores, Landesberg said Grove aims to stand out with its ingredients as well as its packaging. He points to the line of hand soap refills that come in a brightly-colored brushed aluminum container, a decision that was made because it can be recycled much easier than plastic.

And he noted the brand’s seasonal launches, suitable for endcaps and holiday displays, that includes scents like Balsam Fir and Twilight Wonders.

“It’s not about ‘How do we winnow down plastic?’ It’s about, ‘How do we create compelling zero plastic alternatives?’” Landesberg said. “This is not a trade down. They still can feel good about themselves for the choice that they’re making.”

Justin Bean, a sustainable products expert and author of “What Could Go Right?,” said there’s long been a perception that buying more sustainable products requires shoppers to spend more or lose quality. But that’s a false choice, he said, especially as products become easier to access.

“Just like any traditional market, there’s a market for something more boutique, mainstream and cost-competitive. Across all of those, we’re starting to see some normalizing and stabilizing, which is good for everybody,” he said.

Grove’s push into other potential product categories is a “savvy strategy,” Bean said, that will secure them a space on future shelves as the tide continues to turn.

“You can do well from a business and profit perspective by choosing sustainability,” Bean said. “The Kodaks and the Blockbusters of the future are the companies that decide not to do that.”