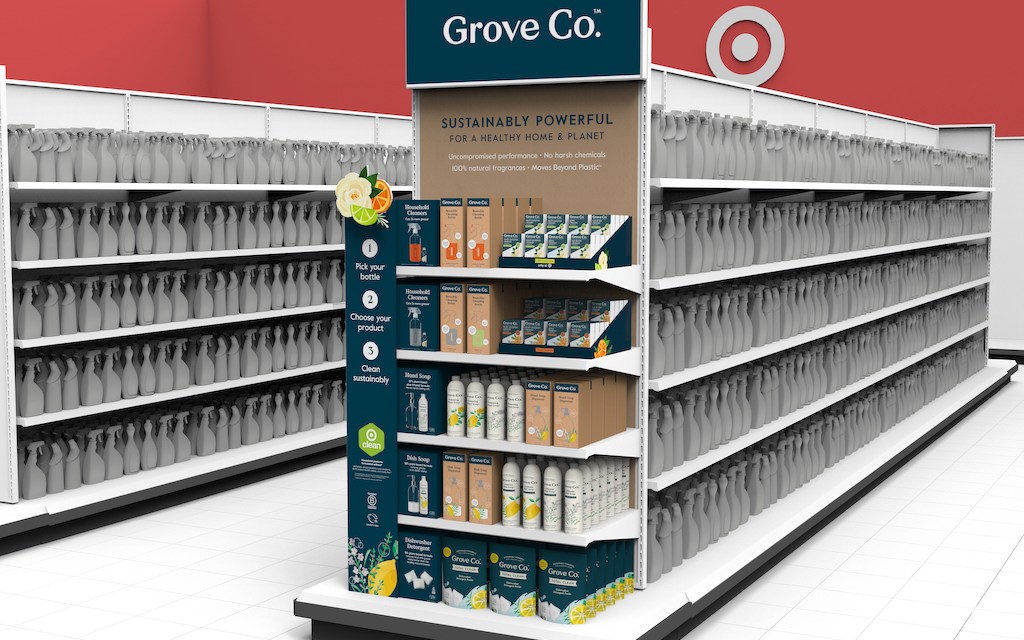 After years of building out its digital marketplace, Grove Collaborative is landing at its first retail location.

The San Francisco-based company, which sells eco-friendly home essentials and personal care products, is bringing some of its offerings to Target stores later this month.

Coming to Target gives the company an opportunity to reach new customers, CEO Stuart Landesberg told Modern Retail. Grove, which first launched in 2012 as an online marketplace carrying products by Seventh Generation and Method, has been gradually adding its own products since 2018. Over the years, the marketplace-focused startup has been apprehensive about a foray into retail.“But we chose Target for their store design and overall mission to educate customers on brands,” Landesberg said.

Grove was one of a number of brands that saw a spike in customers when the pandemic hit. Last March, the company saw a 5x increase in hand sanitizer sales. The company, which was most recently valued at $1.32 billion, has since focused on building customer retention via its subscription offerings. Now that the demand spike has subsided, the company sees another growth strategy by offering several of its private label’s cleaning products on Target’s website and at locations nationwide.

The items available at Target will include Grove’s replenishable cleaning concentrates, dish soap, hand soap along with reusable glass dispensers and spray bottles. The company is also debuting a new scent — “citron and white rose” — exclusive to Target.

According to the company, this retail expansion is focused on brand awareness. All of Grove’s products will be merchandised together “to tell a unified story,” Landesberg said. This is an important differentiator for Grove, he said, in that  it will help educate customers about why the products are unique and help them stand out among the cleaning aisle.

The Target partnership is also a part of Grove’s Beyond Plastic initiative, which was announced in March 2020. The company has pledged to go plastic-free by 2025. “This is another way for us to partner with the industry on making progress on the plastic problem,” Landesberg said.  “So we want more customers to participate in the goal.”

The idea is to lower the barrier for customers to refill products, by allowing them to replenish via a Target run or Grove’s website, he said. After all, e-commerce sales are still a small part of the overall CPG market, he said. Being available to big-box stores’ customers is important for many emerging brands’ growth, he concluded.

Grove has been making a big push to promote its private label. For example, new subscribers currently receive a free pack of its cleaner concentrate and a reusable spray bottle with their first order. At the end of 2020, the company closed a $125 million funding round to help it create more brands. Target presents a new way to further promote its in-house labels.

Katie Thomas, lead at Kearney Consumer Institute, said that Target’s recent DTC partnerships help it cater to its customers’ lifestyle needs. She pointed to Target’s beauty and personal care aisles as an example; over the past month, Target added several health and wellness startup brands to its shelves as a way to stay relevant. “Grove is a strategic fit for Target, given both companies’ objectives to listen to consumers and innovate accordingly,” Thomas said.

If successful, Grove’s presence at Target could have further reverberations. “Ultimately, the partnership may lead consumers to demand sustainability goals from other manufacturers,” she said.