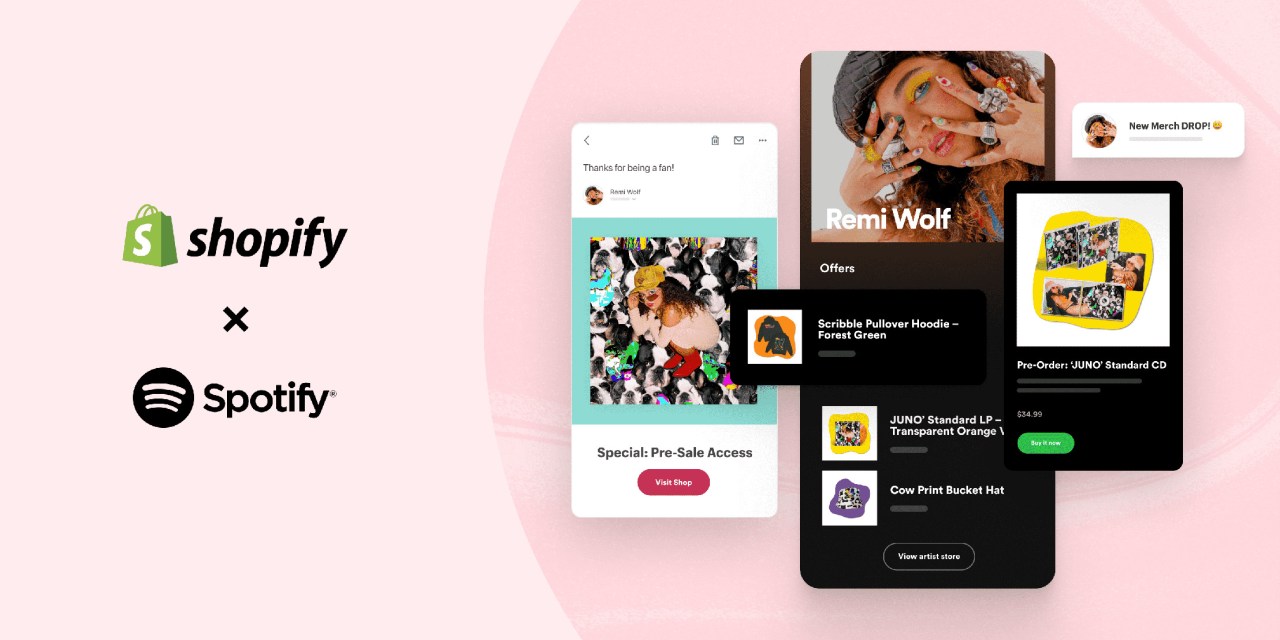 This isn’t Spotify’s only merchandise partnership. The music streaming platform currently has a merchandise partnership with Merchbar, has partnered with Bandpage and Topspin in the past. However, Shopify’s director of product Amir Kabbara said that Shopify hopes to help artists move from one-off merchandise sales on Spotify towards fully-integrated e-commerce businesses connected to each of their online presences. Currently, Shopify has “1,000 or so” artists on its platform, and Kabbara expects the Spotify partnership to increase that number.

This is all part of a big Shopify push to combine entertainment with commerce. In the past year alone, Shopify has built out Netflix’s in-house shopping platform, expanded its partnership with TikTok to in-app shopping and iterated upon its Instagram and Facebook shopping features. Kabbara said that, longer term, Shopify hopes to continue to spread its offerings across both streaming and social media platforms, in its larger efforts to monetize online creators.

Kabbara talked to Modern Retail about Shopify’s streaming and entertainment ambitions, the differences between its Spotify and Netflix partnerships and building a creator economy online. This interview has been edited for length and clarity.

In your press release about the new Spotify partnership, you mentioned that you want to help artists to move beyond “traditional merch to building fully realized businesses.” What does that mean exactly and how will your model differ from Spotify’s past merchandise partnerships?
If you look at what we’re doing with Spotify — and with artists in general — we really think that artists are amongst the most creative entrepreneurs. They produce their own tracks, produce albums, jump from concert to concert and attract tons of listeners and fans. Those fans fall in love with the artists and their brands, and are looking for a lot more ways to engage. We have created a robust ecosystem of apps that can help any new entrepreneurs that are just entering commerce create merchandise or create products. But we also go beyond that.

[For example], think of an artist that wants to release a new album. As they release that new album, they might want to drop additional merchandise synced with that album… [With Shopify] they’re able to do things like drops. After a listener or a fan goes on to purchase their products, they can continue growing that relationship with the fan by offering them exclusive offers or discounts, telling them where the next concert is, or updating them on the latest and greatest.

[Shopify offers] a very simple seamless integration that artists can use in order to do all of that. Compared to the current options that they have today, they will now have a lot more control and flexibility in what types of products that they show, and can manage their end-to-end business.

This announcement follows that of an expanded partnership with TikTok as well a continued Shopify presence on Instagram and Facebook. Can you talk a bit about your strategy of scaling your offerings across a variety of creator platforms and what you’re hoping to do there?
Creators are the next generation of entrepreneurs… and giving them the tools they need to truly do multi-channel commerce is important to us. One of our beliefs is that retail is going to be everywhere, and we want to help make retail everywhere. Buyers… and fans jump from listening to music in Spotify to checking out TikTok and so on. We want to enable creators and entrepreneurs reach buyers across all of these channels, and we’re seeing a lot of interesting signals [that it’s working].

We’ve seen [installs] in our social channels increase by 76%. Even more importantly, we also measure the merchant sales on those channels. And we’ve seen MAUs — which we define as a merchant who’s generating at least a single sale — increase by 270% through these channels.

In June, you also partnered with another major streaming platform, Netflix, on its in-house shopping site. I’d love to know more about your ambitions within the audio and video streaming spaces and how your strategy or offerings differ on streaming platforms versus on social media.
I think our partnership with Netflix and what we’ve done with them is a bit different than… Spotify. With Netflix, it was about enabling them to create their own shop [as a merchant]. (Shopify and Spotify’s partnership is a channel-wide integration across a variety of artists and merchants.)

But the space is pretty new. This intersection of commerce and entertainment… there’s just a lot to explore. I’d expect us to continue testing and learning really what will help merchants, what will help artists, and what will be a compelling experience for consumers through that process. With our ambition of retail everywhere — be it social, entertainment or music — [we want to] enable merchants to reach buyers everywhere.