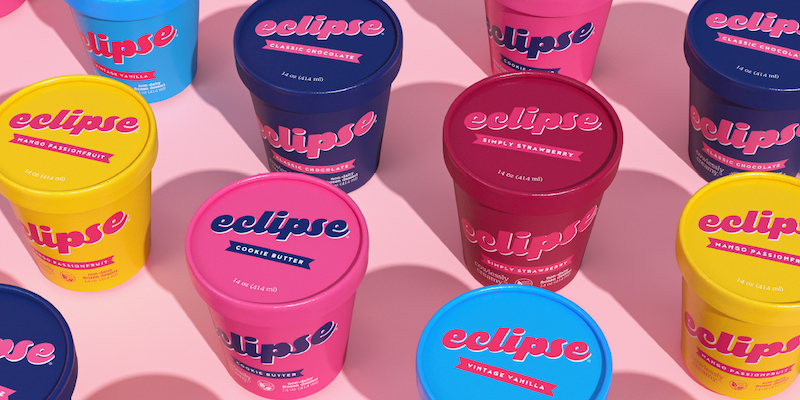 When Eclipse Foods launched in November 2019, the plant-based ice cream brand initially decided to focus on partnering with a handful of ice cream shops — such as New York’s OddFellows and San Francisco’s Humphry Slocombe chains — before expanding into grocery stores. But when the coronavirus pandemic hit last spring, the majority of its ice cream shop partners were forced to shut down.

As a result, the startup had to find ways to reach at-home customers. “We had 98% of our service-based revenue shut down,” said co-founder Aylon Steinhart. Since mid-2020, the company has entered dozens of retail locations, including regional chains and local health food markets. The brand is currently available at nearly 100 retailers and 75 foodservice locations, including Mollie Stone’s Market and Afters Ice Cream chains. As of May 2021, Eclipse had experienced 282% year-over-year growth — which came mainly from retail pint sales.

“The past year, the best industries to be in were in at-home categories, like alcohol and frozen foods,” Steinhart said. “So entering retail was good timing for us.”

Steinhart said that when Eclipse — which uses a blend of plants such as corn, potato, oat and cassava in its dairy replacement ice cream — launched in 2019, its year one strategy was to focus on ice cream shops before entering retail. This was to help create awareness around the brand, while growing its production and distribution capabilities before setting its sights on nationwide expansion. The company also didn’t want to sell its products solely direct-to-consumer, and deal with the challenges of shipping ice cream on dry ice, Steinhart said.

Kendall Dickieson, a marketing strategist for CPG and DTC food brands, said that despite the increased interest in direct-to-consumer, it can be hard for new brands like Eclipse to gain traction solely online.

“Shelf space can be important if you’re launching right now,” Dickieson said. “A retail location or chain has the potential to drive brand awareness, at the very least.”

When Eclipse first launched in 2019, it only carried two flavors: vanilla and chocolate. Preparing for retail also meant adding new flavors, such as Cookie Butter, in order to have a more robust line that could stand out on freezer shelves. Eclipse also did a series of limited-edition restaurants collaborations last year, including New York’s Olmsted and 232 Bleecker.

Steinhart said that subsequent partnerships with grocers came through a mix of both inbound inquiries and outbound pitches.

“When we first entered stores, many buyers were just trying to keep their shelves stocked and were not talking to new brands,” Steinhart said. As time went by, buyers became more open to talking with new brands, and Steinhart said that Eclipse was also helped by the fact that more grocers are in search of plant-based ice cream lines. According to the Good Food Institute, the plant-based ice cream and frozen novelty segment is now worth $435 million, with sales growing 20% in the past year.

Some ingredient sourcing also became a challenge, such as the strawberry puree used in one of Eclipse’s latest flavors. While this set some shipments back, they were eventually sourced in time for the flavor releases. “But the biggest challenge in going into retail has to do with onboarding distributors,” said Steinhart. “We had grocery stores that wanted our products, but didn’t have the staff to work on orders and distributions,” he said. This led the team to seek out more leads until delays subsided.

Eclipse continues to see an increase in inbound interest from grocery stores, said Steinhart, however ice cream shops will remain a big focus going forward. To keep ice cream shops and restaurants stocked for reopenings, Eclipse created a liquid base mix for B-to-B partners; the DIY base can be run through a soft serve machine or mixed up in other machines, like paco jet, with liquid nitrogen, etc. “It allows them to make their own mix and order based on demand,” he explained.

With summer arriving, the company is also looking to experiment with new distribution tactics. Eclipse will have a new ice cream truck — outfitted with a soft serve airstream dispenser — traveling across the country this summer. The new strategy is meant to speed up customer sampling, which had been largely on pause the past year.