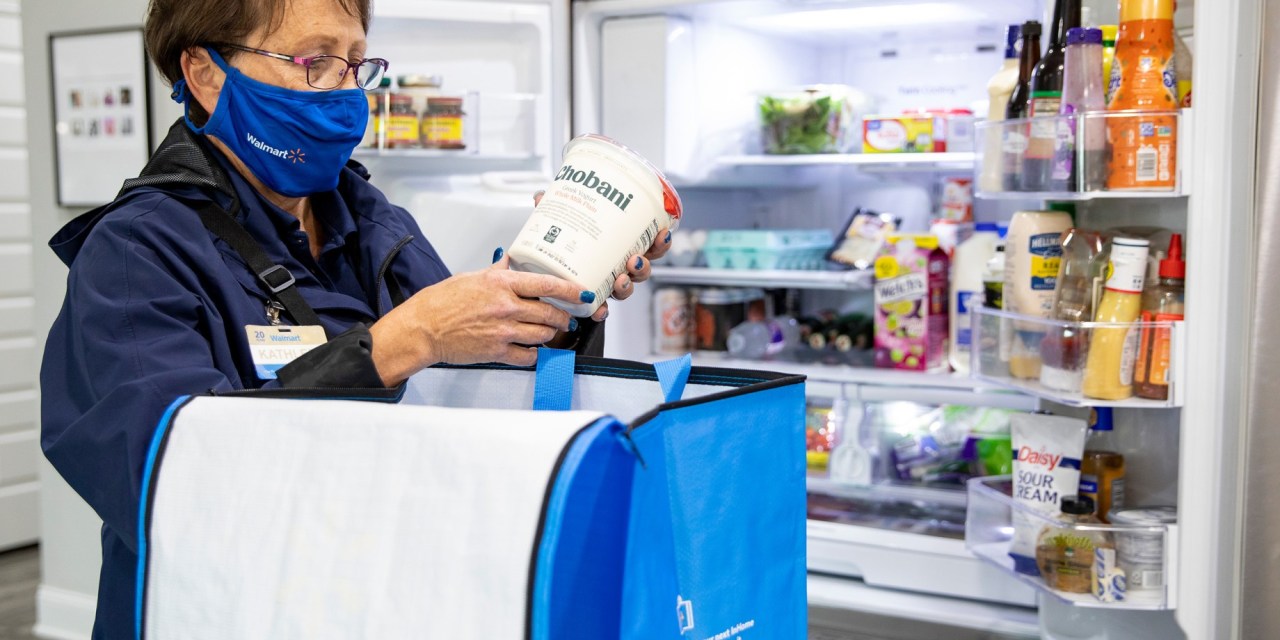 After testing out alternatives to single-use plastic through its InHome grocery delivery services, Walmart is looking to expand these sustainability efforts to its curbside pickup and other delivery services. Other food delivery platforms are making similar inroads.

In the past, sustainability-focused customers could choose to bring their own bags or use paper products to pack their groceries. But, during the pandemic, the percentage of consumers who had bought groceries online skyrocketed from 19% to 79%, according to a Gallup study.

Delivery platforms have traditionally focused on speed over sustainability: for third-party providers like Instacart, for example, grocery stores themselves determine their own packaging and are the companies held responsible for state-based plastic bag fee ordinances. However, as the food delivery space matures, some providers are beginning to take plastic packaging reduction into their own hands through reusable bags and recycled packaging materials.

Last month, Walmart expanded its direct-to-fridge delivery service, InHome, to 30 million households. As the program expands, Walmart is testing out new ways to reduce the plastic and packaging used in the service. One is through the use reusable tote bags that Walmart would use, collect, wash and re-use.

Last fall, Walmart first piloting the bags for its “InHome” delivery service, which allows consumers to order delivery that will be unpacked in their own fridges and pantries. The pilot launched in a single New York store, but the company now plans to expand the service to the rest of the Northeast, said Jane Ewing, Walmart’s senior vice president of sustainability, to CNBC. With that, Walmart plans to experiment with using these and other alternatives to single-use plastic through its curbside pickup program and other delivery services in the first half of 2022.

Beyond food delivery, Walmart has previously committed to using 100% recyclable, reusable or industrially compostable packaging by 2025. This, explained the company in a sustainability statement, would require collaboration with suppliers on recycled or reusable packaging.

Grocery is the largest contributor to plastic waste, according to the Baker Institute for Public Policy, and accounts for over 82 million tons of waste a year, according to the EPA. On top of this, grocery delivery also has product bagging waste, on top of already sky-high product packaging waste.

“As the pandemic forced consumer dining behavior changes, the demand for online food delivery service has surged, increasing with it the consumption of single-use plastics,” Chad Lusk, senior director of Alvarez & Marsal Consumer Retail Group, wrote in an email.

Lusk added that while many food delivery services neither manufacture or sell plastic-based products themselves, they should still “feel a degree of accountability, given [that] the space has served as a catalyst of plastic consumption.” And, to various degrees, some companies have started taking action.

Walmart — which does sell plastic products through its multiple delivery services options — is part of the “Beyond The Bag” collective with CVS, Target and Kroger. The idea is to fund — and eventually implement — technology that eliminates the need for plastic bags for both online delivery and in-store purchases. Walmart has piloted technology from four grant winners already, like a bag cleaning system kiosk and an app that tracks and rewards reusable bag usage.

Other players in the grocery delivery space — like so-called ugly produce providers — have been expanding their sustainability efforts from reducing food waste to reducing packaging and plastic waste. Both Misfit Market and Imperfect Foods state on their website what type of packaging they use and why.

Misfit Market, for example, currently uses recyclable shipping boxes, Paperlite internal boxes and recyclable Climacell insulation to ship its products. When produce bags are necessary, the company uses compostable bags instead of plastic. According to Misfit Market’s site, the company is further “testing a few types of eco-friendly insulation that protect your groceries in transit.

Imperfect Foods, meanwhile, has a program in which customers can send the packaging that was used to ship items to them — like egg carton liners and gel packs — back to Imperfect Foods for the company to reuse in other orders. Imperfect Foods also provides information on where consumers can recycle or dispose of packaging they don’t return.

Moreover, while meal delivery companies have been criticized for using too much packaging in the past, some are trying to get more sustainable. Blue Apron partnered with How2Recycle in 2020 for a label program that would clearly communicate how and where to recycle packaging to consumers. In 2021, Blue Apron promised to achieve 100% “recyclable, reusable or compostable” packaging by 2025.

However, many of the largest grocery delivery providers don’t sell products themselves, including Shipt, Instacart and FreshDirect. Instead, these companies partner with grocers and, in turn, leave the packaging decisions up to them.

Instacart, for example, only allows consumers to specify bag preferences in the comments, versus using an overt opt-in or opt-out button. The company’s latest comment on the issue was in 2019 when a Twitter user asked if Instacart was planning to offer a service of reusable bags, versus plastic.

“Although we don’t have a solution for this just yet, our team is working to make improvements to be a better and more eco-friendly way of shopping,” said Instacart’s Twitter in response to a query in 2019. “At this time, the best option is to request that your shopper use paper bags via our in-app chat feature.”

Implementing sustainable packaging is a potentially a more complicated model for platforms that rely on partnerships versus those that fulfill their own inventory. Walmart can enact a single packaging standard across all of its stores, while Instacart has to account for variations by states, cities and stores.

Judith Enck, president of non-profit Beyond Plastic, said that “local laws” are also an important factor in getting delivery services to reduce plastic waste. Many cities and states have fees associated with plastic bags and even paper bags — New York, for example, has fully banned plastic and added a five cents fee for every paper bag.

“[Delivery providers] not doing enough to reduce their use of plastic, absent new laws,” said Enck.

Still, Enck is hopeful that plastic and packaging reduction is coming. Enck pointed to a recent study by Ipsos and Oceana that found 82% of Americans said that they were concerned about plastic pollution, and 77% believed that companies needed to stop producing so much plastic.

“Food delivery providers are in an advantaged position to create high-impact actions in shorter time horizons to improve sustainability through either changes in materials or circular systems,” said Lusk. “Those that don’t plan and start moving will get left behind once it does become a key consumer purchase selection criterion.”