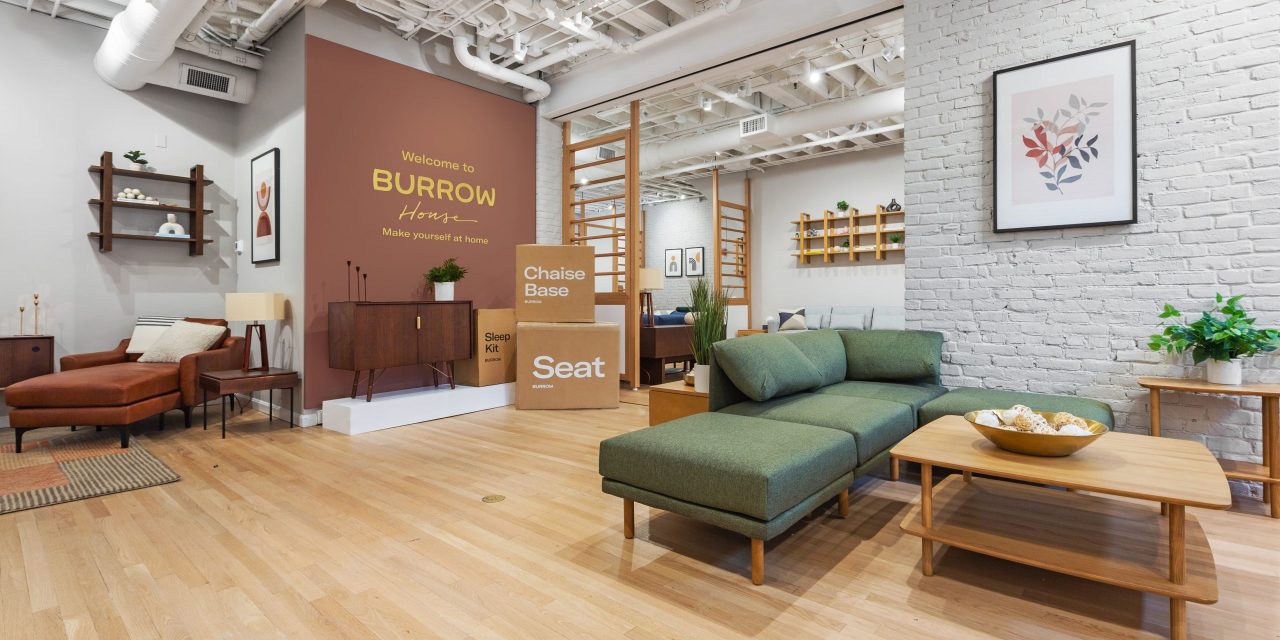 Burrow is bringing its design-centered furniture to more cities across the U.S.

Over the next two years, the direct-to-consumer furniture and lifestyle brand will open 10 new stores. One of its newest stores in Boston will open by appointment-only on April 26, and in May, it will be open to the public.

“Even though we’re trending in the direction of fewer and fewer people [needing] to shop in a store to feel comfortable making a purchase online, there’s still a lot of people that do want to try it out in person,” Burrow co-founder and CEO Stephen Kuhl said.  “We always knew that for our category, it’s important to have a showroom.”

Launched in 2017, the company was focused on the idea of making it easier for customers to settle into their new homes. Burrow opened its first store in Soho back in 2018 and has used it as a testing ground to understand what customers look for in physical stores. About four years later, Burrow is ready to apply those findings to its new physical footprints.

The company declined to share its exact revenue figures but said it has grown 92% between 2020 and 2021. It has also raised $63 million in total funding to date. Some of its assortment includes various sofa and sectional product lines, a bedroom collection and home office furniture.

Kuhl said that customers that go into Burrow stores have often already heard of the brand and already know which products they’re looking for. Its Soho store had a 22% conversion rate. Because of this, Burrow has invested in clienteling experience, where in-store staff give customers one-on-one time and frequently follow up with them afterward.

The brand is also bridging its physical retail presence with its e-commerce strategy. The brand is offering virtual consultations in addition to its in-person appointments. Customers will also be able to preview soon-to-launch products in the new stores before they’re available online.

“If our goal is to make the most convenient experience for customers to buy and receive their furniture, for many people, seeing it in person is a part of that journey,” Kuhl said. “The only way to do that is actually provide physical spaces for them to go to, and so that’s why we definitely want to do this in every major city.”

He said apart from its Boston store, the location for the other stores has yet to be finalized. However, Kuhl said that he’s eyeing locations where many of its customers reside and is around 2,000 to 4,000 square feet.

Polly Wong, president of DTC marketing agency Belardi Wong, said that a large majority of furniture sales still happen in stores. As a result, many of these home brands that started out as DTC players, are now opening up stores.

Home goods brand Parachute, for instance, said it is opening 30 new stores by the end of the year. Food52 is also planning to open up a flagship retail store in New York. Meanwhile, e-commerce furniture company Wayfair said in December that it is opening brick-and-mortar stores for its AllModern and Joss & Main brands this year.

“If you don’t open physical stores, you’re literally losing out on two-thirds of the market in the furniture category,” she said. “From a marketing strategy perspective, you’ve got to be where the customer is.”

Nishant Shrikhande, senior analyst, digital commerce insights at Kantar, said that physical stores can be an effective method of acquiring new customers, especially because the cost of digital marketing can be expensive.

However, opening physical stores comes with risks. “We have seen some examples where brands have expanded their presence and then had to retract it again just because they are not necessarily seeing the foot traffic in all of their stores that they might want to,” Shrikhande said.

When the pandemic initially began spreading in the U.S. back in 2020, DTC beauty brand Glossier was among those that shuttered its stores. The brand has since opened new stores in cities like Los Angeles and Seattle.

Burrow’s Kuhl said the goal for every store that it opens is for it to be “profitable on a four-wall basis.” Its Soho store alone accounts for 5% of its revenue at the moment. Once its retail locations had been fully rolled out, Kuhl expects stores to make up a “meaningful” chunk of its revenue but likely less than 50%.

The company has been launching new products around every quarter for the last couple of years with more in the pipeline, Kuhl said. As for any new category it wants to embark on: “we’ll enter all of them,” he said.