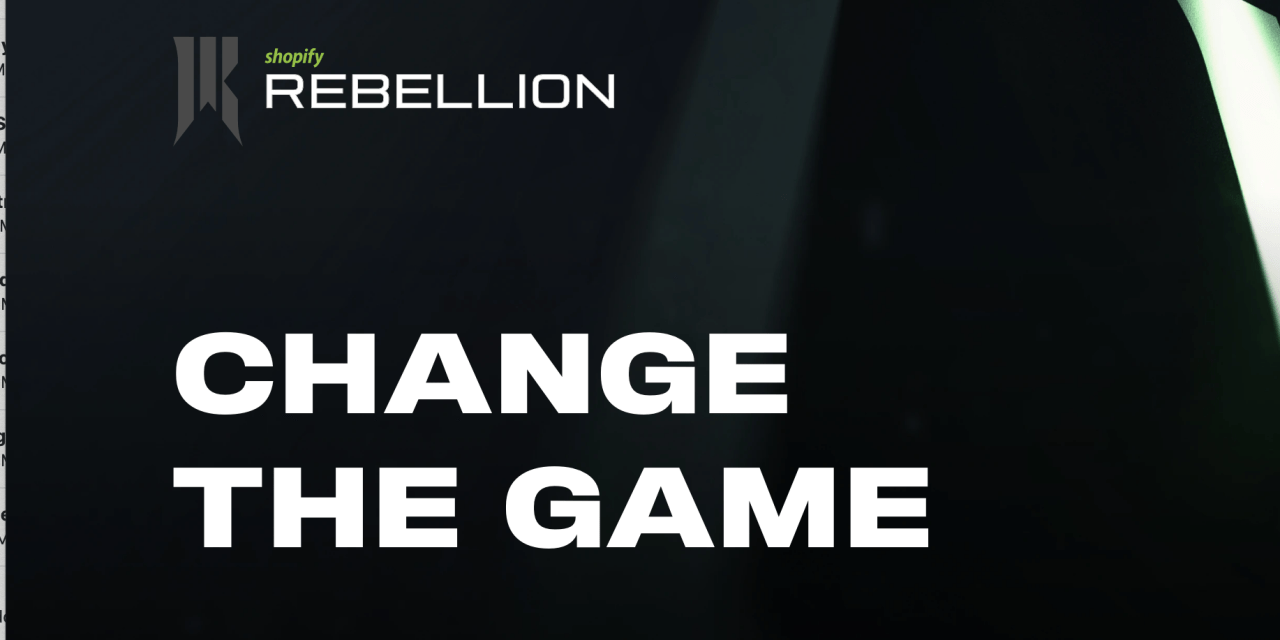 Shopify is launching its own esports team.

The team, called the Shopify Rebellion, will start by competing in the sci-fi game StarCraft II. Shopify has already recruited three players, including a former StarCraft world champion, to join. As unexpected as it might sound, Shopify is no stranger to the esports landscape, in large part because Shopify CEO Tobias Lütke is himself a long-time esports fan. The company had previously sponsored several esports leagues, and in the fall, it hired a former StarCraft player, Dario Wünsch, to become head of its esports division.

Shopify’s announcement is coming as retail brands express a growing interest in esports. In its 2020 market report, which was published in February 2020, the games and esports data company Newzoo estimated the global esports audience to be 495 million in 2020. The company predicted that in 2020, the industry would bring in $1.1 billion — including sponsorships, tickets and media rights. That was before the lockdowns. Given that other professional sports disappeared for multiple months last year, and have seen their ratings fall since they returned, brands have been exploring esports with a new fervor — and Shopify’s represents one of the biggest bets yet from a major company.

As a category, “esports” is a collection of individual leagues, each of which is based around a video game: the NBA 2k League, for instance, plays that game competitively, and viewers watch either on a platform like Twitch or — in rarer cases — on a second-tier cable channel, like ESPN 2.

Companies focused on snacks, drinks, shoes and other types of merchandise disproportionately sponsor esports games, but the space has broadened significantly in recent years, as more companies — including a number of e-commerce-focused brands — seek to reach the highly engaged, young audiences that watch esports. Though esports have been around in some form for roughly two decades, the new brand interest parallels the rise of brands on Twitch, the streaming platform of choice for most esports competitions.

Shopify’s latest moves are, if nothing else, expensive. While other companies have paid to sponsor a team or league, Shopify is actually building its own team from the bottom up — investing in gaming talent and in growing a fanbase.

“Investing in an esport is no different than buying an NBA team or buying a baseball team,” said Dan Ciccone, CEO of the esports and gaming content development firm Stacked Entertainment. “What goes into running a successful esports team is no different than running any professional sports team.” Comparing the Shopify Rebellion to an in-person sports team helps illustrate why Shopify’s move is so significant: it would be like if Walmart didn’t just sponsor a baseball team, but actually bought it and managed it from the inside out.

To some degree, Ciccone said, Shopify’s team makes a certain amount of business sense. Most esports fans, he explained, are young and tech-savvy, and “arguably they’re going to be the next generation of entrepreneurs” — making them well positioned to become future Shopify customers. Ciccone added that, as far as he can remember, Shopify has long been a platform of choice for esports players and teams who are trying to sell merchandise. Plus, said Ciccone, the esport that the Shopify Rebellion is competing in — Starcraft II — has a big following outside of the U.S. and Europe, particularly in Asia, and “for Shopify, they might say, ‘that’s an important audience for us to grow,’” Ciccone said.

But on the other hand, starting an esports team — and paying for talent, merchandise, entertainment channels and advertising to draw fans to a team that hasn’t existed before — is an expensive endeavor. “There are much better and cheaper ways to learn about esports than creating your own esports organization,” Ciccone said.

Candice Mudrick, Newzoo’s head market analyst, said that the Shopify investment seemed to be as much of a market play as a passion project. “This move from Shopify is in large part because the CEO loves the game,” Mudrick said in an email.

Shopify isn’t the most natural fit for esports. Esports leagues tend to have the most audience overlap with specific segments of retail world, including the sneaker industry. One survey of readers the esports media company DBLTAP found that 23% of its audience spends at least $500 on fashion — meaning mostly sneakers — per year. Other brands investing in esports includes snack companies like Sour Patch Kids, which sponsored the Overwatch League and gave away gummies at events. In the closest comparison to Shopify, Amazon sponsors a set of student-focused competitive tournaments in Europe through its Amazon University Esports program.

Some other retailers have recently begun testing the waters. The Texas-based grocery store H-E-B, for instance, sponsored a Houston-based esports team in 2019, a move that added H-E-B’s logo to every player’s jersey. In 2018, Ahold Delhaize sponsored an esports team within the NBA 2k League, called Wizards District Gaming, making it the first grocery store to do so, according to Progressive Grocer.

While esports leagues rarely get the kinds of TV distribution of major physical sports, esports in general functions the same way. One noteworthy difference, at least at the moment, is that with the exception of the heavy hitters like FaZe Clan — a professional esports organization that has teams across several leagues — esport teams don’t have large, loyal followings. Instead, most of the excitement and the sense of attachment from fans is usually channeled to the individual players.

With that, building up a team’s following from scratch, as Shopify is trying to do, is a tall order. “There’s only a few teams that have that major of a brand cachet,” said Ciccone. “Otherwise, the audience follows more individuals.”