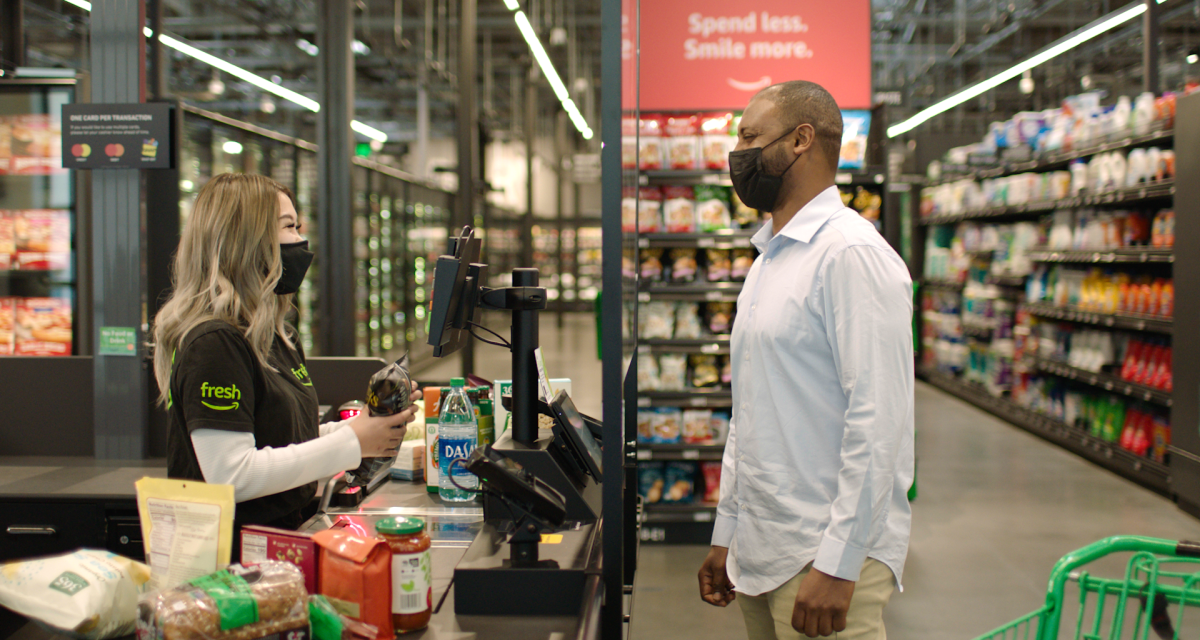 Amazon is testing and launching some of its new advertising products with grocery advertisers, a category that’s grown in value and frequency for Amazon shoppers. With new ad placements and better optimization tools, the tech giant is prioritizing getting more ad dollars from its grocery vendors.

During its annual advertising conference held last week, Amazon said it will be rolling out the capability to use digital signage ads that can be created through its programmatic ad campaign tool in DSP, to make it easier for brands to run ads through its Amazon Fresh grocery stores. The digital signage ads in DSP will be “available in November to eligible U.S. advertisers,” the company said in a press release.

Retail analysts agreed that the move signals that Amazon’s advertising ambitions increasingly revolve around companies that sell household items and everyday goods. But they also pointed out that Amazon still falls well short of the influence and reach of other major grocery rivals like Walmart and Kroger. The focus on grocery sellers comes at a time when Amazon is bracing for tougher times as its most recent earnings point to mounting losses in its e-commerce division.

A top executive from Amazon Ads during the opening keynote at the Unboxed event said in testing out digital signage ads with Kraft Heinz, the CPG conglomerate saw a 40% lift in sales for its powdered beverage mixes Crystal Light, liquid water enhancer Mio Energy and Kool-Aid, versus the six weeks prior. Separately, Amazon is also launching omnichannel metrics for grocery and consumer packaged goods advertisers using Amazon DSP in order to provide clients with more precise campaign impact data across all shopping channels.

“Over the last few years we’ve been testing a range of different experiences in physical stores. At the moment, we are testing digital signage ads in Amazon Fresh stores using contextual targeting, such as store location, product category or time of day,” said Colleen Aubrey, senior vice president for ad products and tech at Amazon Ads. “I was really excited to see this result for Kraft and I see many opportunities to iterate on improved performance and advertising in physical stores.”

With its omnichannel metrics launch, grocery brands will see combined online and offline sales metrics occurring both on and off Amazon in standard Amazon DSP reporting, the company said. The e-commerce giant had introduced omnichannel metrics in beta earlier this year.

“Now you’ll be able to understand how your ads impact purchases of your products at other stores and outlets,” said Paula Despins, vice president of ads measurement. “In addition, we will soon be offering you the capability to automate budget optimization for the total impact of your campaign, inclusive of both the online and offline sales.”

“Because omnichannel metrics are available during your campaign not just at the end, if you opt-in, budget will automatically shift between line items based on performance measurement using all the outcomes for your campaign,” Despins added. In early 2023, Amazon said it will start incorporating Amazon shopper panels signals into omnichannel metrics to more advertisers beyond consumer packaged goods and grocery.

Over the past decade, Amazon has been building out its grocery presence through Prime Now, Amazon Fresh, Amazon Go and other initiatives. It’s now been over five years since Amazon made its first major grocery store investment with the acquisition of Whole Foods. And nearly 15 years have passed since it launched its food delivery service, Amazon Fresh.

Grocery is an especially profitable sector due to the value of the category and the frequency of purchases said Neil Saunders, managing director for retail at consulting firm GlobalData. “Brands will spend vast amounts of money to influence consumer behavior and nudge consumers into buying their products. The big CPG brands also have deep pockets for advertising and marketing which Amazon will be keen to tap.”

Saunders also said that grocers like Walmart and Kroger, which recently acquired Albertsons, are also increasingly looking to encroach upon Amazon’s territory by building out their own ad networks. “So Amazon is keen to develop new offerings to help defend its turf,” he added.

Andrew Lispman, principal analyst for retail and e-commerce at Insider Intelligence, agreed. “The future of Amazon’s advertising ambitions run through groceries,” said Lipsman. “It’s all about first-party data to be used for targeting and then being able to measure the closed loop on purchase. So it makes a lot of sense that they are opening Amazon Fresh stores, enabling that data for targeting purposes working with brands like Kraft.”

For the most recent quarter, Amazon reported that revenue from its advertising business grew 25% year-over-year to $9.54 billion. Amazon CFO Brian Olsavsky said, “Advertisers are looking for effective advertising. And our advertising is at the point where consumers are ready to spend. So we have a lot of advantages that we feel willl help both consumers and also our partners like sellers and advertisers,” during the earnings call.

Ultimately, Amazon is keen on building out more advertising options as it allows them to leverage their data and generate incremental revenue, Saunders said. But in order to do so, Amazon will need to give grocery brands more places to advertise — which could mean building out more stores.

“I think grocery will become a bigger part of Amazon’s advertising business. However, it still doesn’t have anywhere near the reach and impact of the big players like Walmart and Kroger, which are number one and number two in the grocery space in terms of market share. Those players have the advantage of being able to reach more food shoppers and use their vast network of stores to offer a very comprehensive solution to brands,” he said.