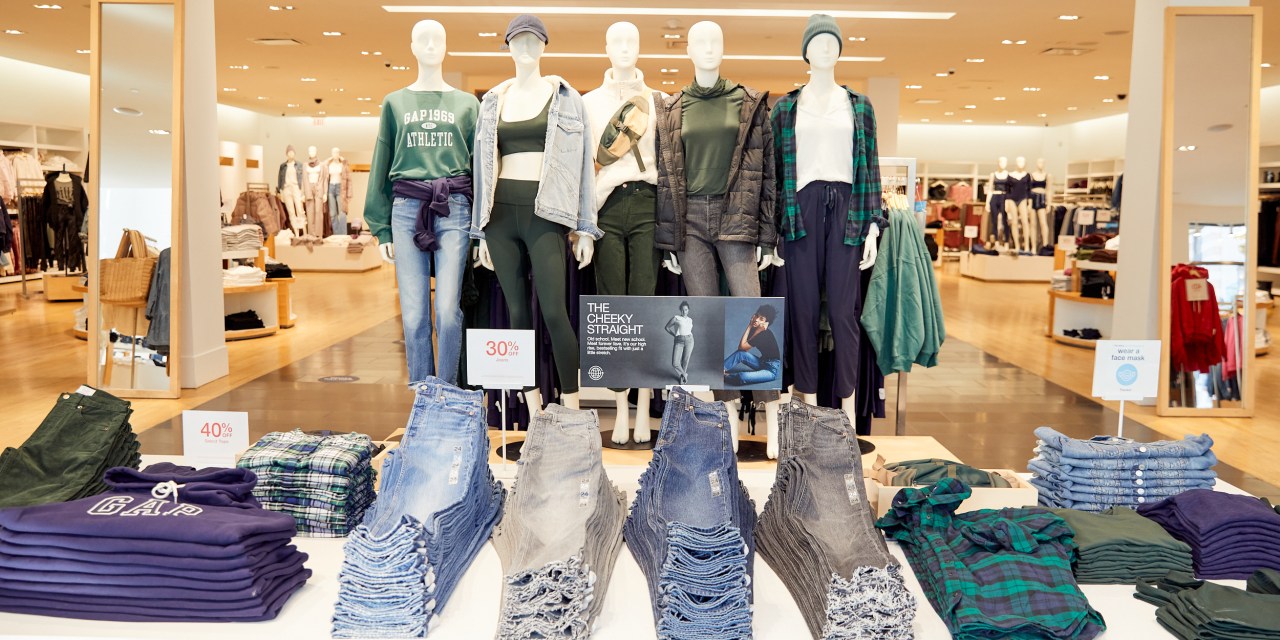 Despite investments ranging from NFTs to buzzy collaborations, mall stalwart Gap is still struggling to rebrand itself to maintain relevance as a leading apparel company.

Last week, the brand’s parent company, Gap Inc., was downgraded to a midcap stock and removed from the S&P 500. Moreover, the company’s third-quarter earnings in November significantly missed expectations. Gap Inc. reported a net loss of $152 million, compared to a profit of $95 million in the third quarter the year prior. Net sales at the company’s Gap brand, specifically, were down 10% compared to 2019.

It’s not that Gap hasn’t attempted any new ideas — the brand has tried to reposition itself as a lifestyle brand in various ways over the past couple of years. In the past month and a half, Gap has announced a new Yeezy drop, as well as its first NFT project. Last year, Gap released its first home collection in partnership with Walmart, as well as an integrated loyalty app with its sister brands to encourage cross-selling. However, analysts who spoke with Modern Retail believe these efforts are piecemeal. Online and off, Gap’s buzziest moments have driven short-term interest, but not long-term customer retention.

After a successful four-year stint as Old Navy CEO, Sonia Syngal was promoted in 2020 to CEO of Gap Inc., which owns Gap, Old Navy, Athleta and Banana Republic. A few months after her appointment, Syngal revealed her “Power Plan 2023” strategy to turn around Gap Inc.’s performance. Broadly, Gap Inc. would focus growth on the high-margin brands of Athleta and Old Navy and offload smaller brands it had acquired over the years like Jackie and Janie and Intermix.

At the Gap namesake brand, meanwhile, the company would shutdown unprofitable stores and focus growth efforts on a buzzy collaboration with Yeezy as well as a licensing deal with IMG.

Yeezy and Gap partnered for a 10-year collaboration in June 2020. At the time, Gap and designer Ye, who changed his name from Kanye West, predicted that the collaboration for a line of low-priced basics would drive a billion dollars in future sales, or about a fifth of the company’s then total revenue.

A full collection between the brand and Ye was supposed to roll out last year. Thus far, however, only two items have been released. According to two insider sources who spoke to the Financial Times, Ye has full control over the collection, and Gap executives are frustrated by the slow rollout. Representatives for both West and Gap declined to comment when FT reached out to both parties about the issue.

In Gap Inc.’s third-quarter earnings, CEO Sonia Syngal said the brand’s September Yeezy Gap hoodie drop “delivered the most sales by an item in a single day in gap.com history” and that 70% of sales were from first-time Gap customers. Syngal praised the collaboration for “unlocking the power of a new audience for Gap” of “Gen Z plus Gen X men from diverse backgrounds.”

There have also been some signs that Gap is experiencing a renaissance among younger consumers. Gap hoodies have become all the rage on TikTok: the hastag #gaphoodie has 9.3 million views and thousands of videos of Gen-Zers incorporating the product into their fits. In June, Gap even took to TikTok last year to crowdsource product ideas from Gen-Z creators.

But Gabriella Santaniello, founder of retail consulting firm A Line Partners, said she thought there was still a big disconnect between what Gap sells in its stores, and some of the newer digital initiatives it is pushing.

“You go to a Gap now and you’re like, ‘Okay, well, this is where my mom shops,’ but then they’re pushing NFTs and then they’ve got Yeezy,” she said.

“Gap hopes to create a halo effect with Yeezy,” said Jessica Ramirez, a retail analyst at investment research firm Jane Hali & Associates. “The consumer gets excited and then they start coming back into the store, coming back to your website and getting excited about your brand. But it [only] works if your core product is also able to respond to that.”

In May last year, Gap announced another partnership: a Gap Home line at Walmart. Unlike Yeezy Gap, the line is, in fact, an actual collection. In a press release at the time president and CEO of the Gap brand, Mark Breitbard, said the new line, “opens a new door for Gap as a lifestyle brand.” In May, the brand released over 400 SKUs in home decor on Walmart.com and in select Walmart stores. In October, Gap Home expanded to furniture.

However, once again, site traffic was limited. In a Similarweb analysis of Gap Home segmented traffic at Walmart.com, total traffic has been less than 100,000 visits for the past six months.

“That is so small,” said Seema Shah, a senior director of research and analytics at Similarweb. “Gap.com has 66 million visits per month on average. [Gap Home] is not really moving the needle for them.”

Gap has consistently underperformed compared to its more successful sister brands, Athleta and Old Navy. In the same third quarter of 2021 in which Gap’s net sales decreased 10% compared to 2019, Athleta and Old Navy increased net sales 48% and 8%, respectively. Old Navy leaned on its new investments in extended and plus sizes to drive new customers to the brand. Meanwhile, Athleta partnered with famous Athletes like Simone Biles to double customer acquisition year-over-year.

Sensing broader portfolio strength, Gap Inc. revamped its loyalty program to tie points and rewards across its brands to encourage cross-buying. John Strain, chief customer, digital and technology officer at Gap Inc. earlier told Modern Retail that “our goal is to turn customers into lifelong loyalists.” However, it’s unclear whether that’s paying off, as the company hasn’t broken out loyalty memberships’ effect on sales by specific sub-brands.

“They’ve been closing stores — which is great — there are too many Gaps and we don’t need that many,” said Ramirez. “They have been working on having less promotions… which, again, is positive.”

However, Ramirez said on-trend assortments are not “consistent” for Gap in the remaining stores. Despite the company’s denim roots, for example, Ramirez said Gap has “missed” the 2021 denim resurgence.

“This is a huge missed opportunity; it doesn’t make sense” said Ramirez. “They were streetwear people in the 90s. I don’t know how you can miss that. The denim thing, it’s been slowly knocking on the door since pre-pandemic.”

Ramirez added that this isn’t a problem endemic to a certain type of heritage retailer or mall brand. Levi & Strauss’ fourth quarter 2021 revenue, for example, was up 22% compared to 2020 and 7% compared to 2019. “Levis has started tapping into luxury, into collaboration and — if you look at their core products — has also evolved into what the consumer is interested in today,” said Ramirez. Abercrombie & Fitch, meanwhile, has also overcome its mall brand past for 10% growth year-over-year in the third quarter of 2021.

“[Gap] is still operating in these little silos and it’s not really tied together… the customer can just sense that inauthenticity,” said Santiello.  “That’s one major reason for them to really focus on closing that loop.”