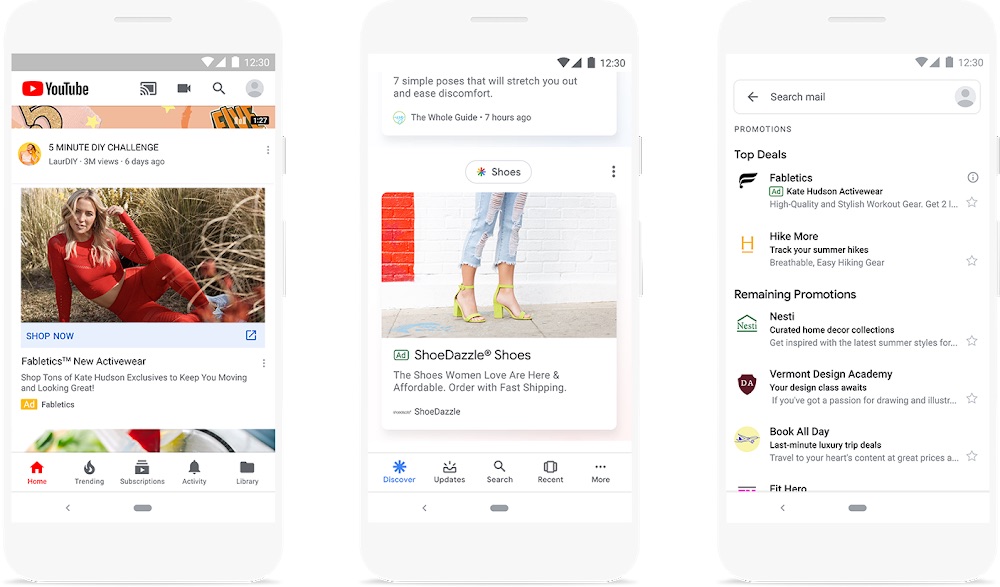 Last week, Google officially rolled out a redesigned homepage for Google Shopping, in its latest attempt to build a marketplace that can compete with Amazon.

It’s not the only move Google has made over the past year to encourage more shoppers to stay on Google to discover products, instead of going to Amazon or Instagram. Google has been releasing a steady drip of new advertising formats — ranging from catalog-style ads, to testing the addition of shopping links on YouTube — to encourage retailers to continue to spend their advertising dollars on Google. And, they want to convince younger direct-to-consumer brands to invest in more than just search and keyword ads — they also want to convince them that Google’s a good place for brand building and visual discovery.

“I would say within the last two years, Google has made a significant investment into the evolution of their ad units and formats in a way that other platforms really haven’t,” said Katya Constantine,  CEO of digital media agency Digishopgirl Media, which works with consumer brands like Noom and Away. “It is changing where Google is in comparison to Facebook, because Facebook is so much more visual.”

Here’s an explainer of all of the new types of shopping ads Google is pushing, and why.

Why is Google releasing more shopping ad formats?
Google, along with Facebook, still dominates the digital advertising space. During its second quarter earnings last week, Google reported advertising revenue of $32.6 billion, up 16% year-over-year. But its advertising business has been growing more slowly than it used to, as it faces a few competitive threats.

First, more shoppers are going to Amazon first to search for products, rather than Google. A 2018 report from marketing analytics firm Jumpshot found that 54% of product searches now start on Amazon — in 2015, more product searches started on Google.

At the same time, Facebook’s Instagram is starting to make a bigger push into shopping with the launch of checkout earlier this year, and Pinterest getting more serious about commerce with its March IPO. The more shopping that consumers gradually start to do on other platforms, the more advertising money Google risks losing.

Why does Google need new types of ads to compete with them?
Platforms like Instagram and Pinterest are visual-first. They’re training shoppers — especially ones of direct-to-consumer brands — to go to their apps to look for new products and, once they see a picture of a swimsuit or a handbag they like, easily purchase them in a couple of clicks. Visual ads have not been Google’s strong suit — text-based ads like search and keyword ads have been.

What new types of shopping ads has Google come up with?
First, Google released a new type of shopping campaign last August called Smart Shopping, which was designed to lessen the amount of work it took for brands and their media buyers to create a new campaign.

According to Google, Smart Shopping uses artificial intelligence to automatically decide where the most optimal placement is on search, display, YouTube, or Gmail. All the advertiser has to do is set their desired budget and objective — it could be conversions, or it could be return on Google Advertising spend — and then let Google decide where to place the ad and what visuals and text to pull depending on the channel. Google automatically pulls images from the merchant’s product catalog. Google’s pitch to brands with Smart Shopping is that it can use its enormous amounts of data to decide where to place their ads and what visuals to pull better than they can.

Additionally, Google’s been pushing Shopping Showcase, another visual ad format that it developed a couple years ago across more formats. It’s a catalog-style ad, similar to ad types that Pinterest and Instagram have rolled out. When a user searches for say, backpacks, and clicks on an ad from a brand that has elected to run a Showcase Shopping ad against that term, it will reveal a handful of other product and lifestyle images from that brand, whatever images they’ve chosen to insert into that showcase ad.  At its Marketing Live conference in May, Google announced that Shopping Showcase ads would now be available to run on Google Images and Google’s Discover feed.

Also at its Marketing Live conference, Google announced the launch of two new ad formats: Discovery, a native ad-like format that emphasizes images and doesn’t allow call-to-action buttons, and Gallery, a scrollable collection of four to eight images that’s optimized to appear at the top of mobile search results. Both ad formats will roll out to all advertisers globally later this year.

“Discovery ads are a new way to reach people across Google properties in the moments when they’re open to discovering your products and services,” Google’s senior vice president of Ads & Commerce Prabhakar Raghavan said in a blog post at the time.

How are these ads working out?
Constantine said that when her firm first started testing Smart Shopping among her firm’s consumer brand’s clients in August, “we found that the cost per customer acquisition was lower, and the scale was higher compared to other Google formats, and also compared to Facebook.” As more advertisers have started utilizing this campaign type, she says the costs have risen a bit, but “are still in line with other channels.”

Smart Shopping’s value proposition is ease of use, but for some brands, that’s also a drawback. Aaron Luo, CEO of luxury bag and accessories brand Caraa and a Digishopgirl Media client, said that one drawback for him is the fact that Smart Shopping will only pull images from a brand’s product catalog.

“We don’t have as much flexibility on creative since this comes straight from the site,” Luo said. “There are some ways around this but it takes some optimization.”

Brandon Doyle, the founder of digital agency Wallaroo Media which works with DTC brands like Casper and Cotopaxi, said that the Showcase Shopping ads have been useful “as a component of our prospecting strategy” — that is, driving top-of-the-funnel purchasing traffic and brand awareness.

“For better or worse, this falls in line with Google’s trend of steadily automating the platform,” Doyle said.