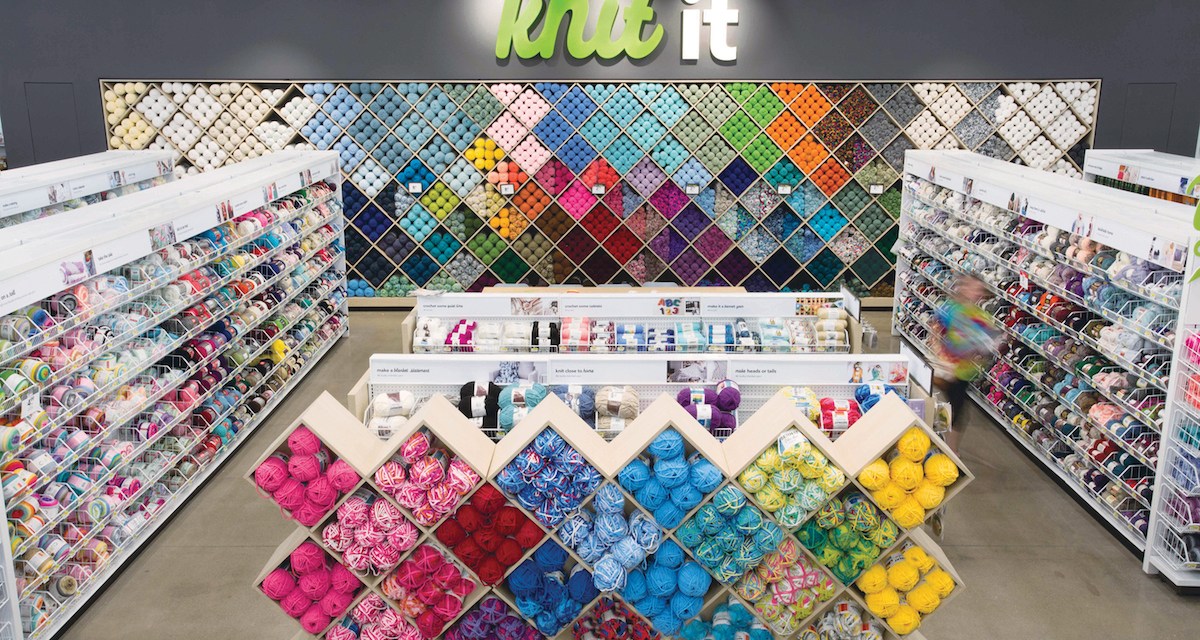 Joann is getting ready to go public, betting that it will be able to ride the crafting boom for a while.

The crafting supplies retailer filed its S-1 last week, reporting that its revenue during the first three quarters of 2020 was $1.921 billion, up 24.3% compared to the same period the prior year. Joann was taken off the public markets after being acquired by a private equity firm a decade ago. But now, the company is ready to take another crack at being a publicly-traded company, citing the fact that its acquired eight million new customers during the pandemic.

“Generally, the leadership team has done a good job of modernizing Joann in terms of its image and in-store experience,” Neil Saunders, managing director at GlobalData Retail said in an email. “The company used to be seen as quite traditional, however, it has moved the needle on that and is now attracting younger shoppers.”

When Joann went private in 2010, the company had no debt, revenue of $1.99 billion and net income of $40 million. At the time other retailers like Gymboree and J. Crew also exited the public markets with the aid of private equity groups, in order to make more expensive investments like store remodels. In the process, however, Joann was saddled with a ton of debt — as of October 31, it had $$929.7 million in debt. Today, Joann has 857 stores, up from 756 in 2010.

A focus on modernization

Even before the pandemic, Joann was focused on building out its digital presence — both on social platforms like YouTube, and in-house through its own subscription programs. In 2017, Joann acquired Creativebug, a subscription-only platform through which users can access art and crafting videos. Joann has also invested in adding more high-tech services in-stores like digital printing and laser cutting. It’s also added basic services shoppers have come to expect from a modern e-commerce company, like buy online, pickup in-store.

Creativebug now has approximately 150,000 monthly subscribers, according to Joann’s S-1, and the retailer has made other similar tech-focused plays. In 2019, the company also invested in WeaveUp, a platform that allows people to print their own custom fabric. In addition to the custom fabric service, Joann says in its S-1 that it also offers “differentiated in-store services” like laser cutting and engraving.

Online, Joann has tried to establish itself as a go-to place through crafting tips, both through its investment of Creativebug, as well as through building out its presence on channels like YouTube, where it has videos geared towards casual crafters, like “crocheting 101,” as well as stories of people who have launched their own crafting in stores. In its S-1, Joan said that it plans to make its YouTube channel — which increased its number of followers by 121% year-over-year during the first three quarters of 2020 — its home for “quick tips and tutorials,” while also “expanding our high quality education offering to customers who are interested in skill building and learning.”

Striking while the iron is hot

It wasn’t until the pandemic, however, that Joann’s investments started to result in huge revenue growth. Between 2019 and 2020, the crafting supply market as a whole grew by 8.4%, according to GlobalData Retail. That resulted in Joann –whose revenue had grown just $10 million between 2018 and 2019 — grew from $1.55 billion during the first three quarters of 2019 to $1.92 billion during the third quarter of 2020.

Andrew Lipsman, e-commerce analyst at eMarketer, said that sales of crafting supplies have been slower to move online compared to other categories, because it’s shoppers tend to skew older, and were less likely to do most of their shopping online than other customers.

But during the pandemic, Joann has experienced a two-fold benefit: many of its existing customers started doing more of their shopping online for the first time. And, Joann said that many of the eight million new customers who came to Joann for the first time during the pandemic, came to “purchase fabric to make their own masks but have expanded their shopping behavior across our diversified merchandise categories in subsequent transactions.”

Now, the hope is that many of these eight million new customers — many of whom skew younger than the typical Joann customer, the company claimed in its S-1 — come back to purchase more crafting supplies. The fact that Joann now has eight million new customers in its database, “it means more first-party data, and you have a chance to continue to market to them,” Lipsman said.

The challenge Joann faces going forward, however, is that the company now has more competitors than just other crafting retailers like Hobby Lobby and Michael’s. More customers are now also turning to e-commerce behemoths like Walmart and Amazon to purchase their crafting supplies, according to Saunders. Meanwhile, rival Michael’s reported sales were up 16% during its most recent quarter hitting $1.4 billion.

“A lot of these goods are still commodity goods — and any time you are competing for online sales, Amazon can beat you on price, and for many things they might beat you on selection,” said Lispman.