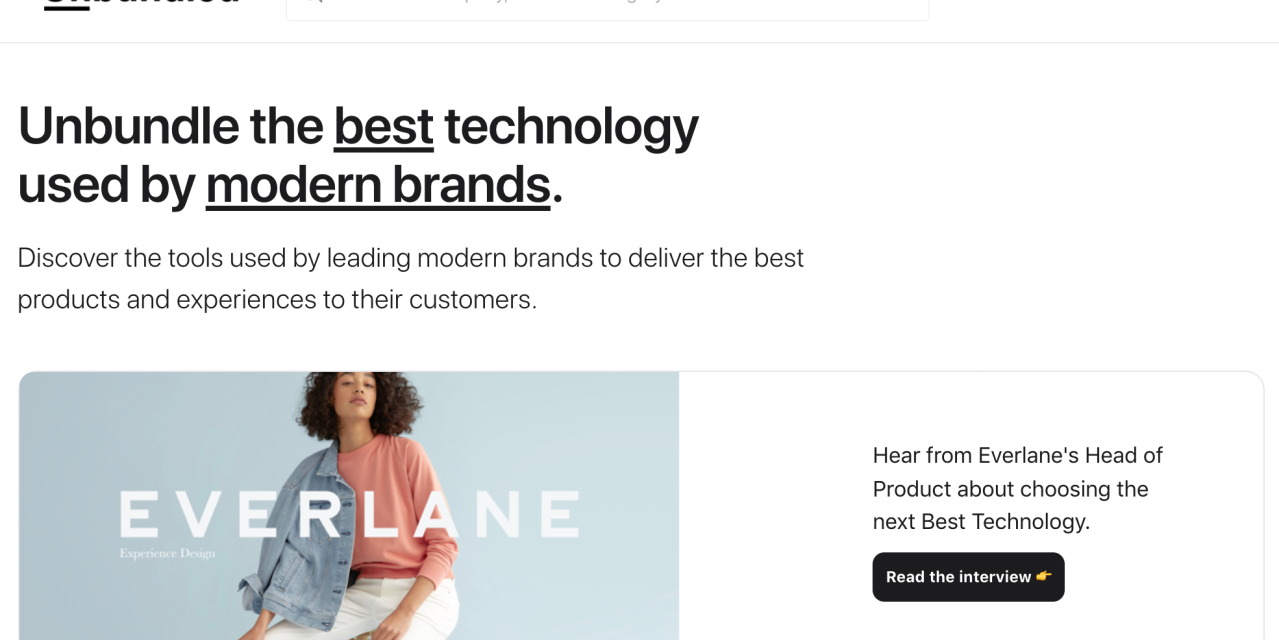 The concept is simple: Unbundled looked at 50 popular online brands currently on the market — from Warby Parker and Olipop — and then used publicly available information to list the retail technologies powering their businesses. For example, on the Allbirds page, Unbundled lists 17 partnering technologies — including Loop Returns, which handles returns and Dynamic Yield, which customizes customer interactions.

According to Joseph Sartre, managing partner at Interlace (who devised and primarily coded Unbundled during his spare time), the idea was to make a tool that could be helpful for anyone interested in growing an online brand that is trying to better understand the competitive playing field. The world of e-commerce integrations is both confusing and growing. In the early days, a person would launch a Shopify site and find a few plugins to add to make for a more tailored experience. Now, the ecosystem is teeming with vendors offering seemingly similar solutions.

As Sartre described it, when brands are researching new tech, they either “go to the Shopify App Store or do a Google search.” As a result, many companies often only find out about new tools via their own networks or unvetted research.

Sartre has been at Interlace, which focuses on pre-seed and seed investments in commerce-related brands, since 2019. The firm closed its first $14 million fund last year — with backing from Bain Capital Ventures and PayPal Ventures — and has invested in companies like B8ta and Cargo. Over the last year, Sartre spent weekend building a smaller version of the platform for himself. He said that he then realized it could be expanded into a more robust tool used by the greater commerce industry. To compile all the data, Sartre pored over industry articles, company websites and even read through brands’ source codes.

Unbundled can be sliced and diced in a variety of ways. Users are able to navigate to individual brand pages and see the tech stacks they use. Or, people can seek out solutions for specific problems and find a list of available tech products and the brands that use them. The topics range from e-commerce analytics to sustainability to forecasting.

The platform also highlights companies in a variety of ways, including “rising stars” — which Sartre said is based on either money raised thus far or other growth indicators if they’re bootstrapped. People can also filter vendors based on if they have a female, Black or Latinx founder.

Sartre added that he took great pains to showcase brands and vendors beyond his bubble — and investment pool. “Favoring our portfolio versus other startups is not in the DNA of this platform,” he said. “You’ll always see, when it’s available, other companies that are doing similar things and the brands that use them.”

Back-end commerce technology has been growing in popularity for over a decade, but outside interest in the ballooning e-commerce ecosystem has certainly accelerated over the last few years. According to CB Insights’ most recent report on retail technology, global retail tech funding surpassed $100 billion in 2021, which was more than double what it was in 2020. Meanwhile, the number of retail tech exits grew 78% year-over-year in 2021.

“Everybody is looking for new partners, particularly to help them solve new problems,” said Jason Goldberg, chief commerce strategy officer at Publicis Group. While retail technology has been an area of interest for years, Goldberg said there’s clearly a growing appetite for vendors that answer to a variety of new experiences, from curbside pickup to social livestreaming.

Goldberg noted, however, that focusing on hot DTC startups will likely most useful to smaller growth-stage brands. “If you’re planning on starting a small company, are launching on Shopify and need a POS system for your one store, it’s helpful to know what POS system Warby Parker or Bombas picked,” said Goldberg. “It’s less likely that Target or Walmart care.”

That being said, Goldberg added that with growing M&A, some bigger brands or retailers could be looking for potential startups to bring into their fold.

Indeed, a database like this is one way to try and find the next big stars. “Being the next Shopify of the world is a financial aspiration that investors can get behind,” said Goldberg. “It’s a smart place to say, hey, the companies and vendors that are going to win five years from now probably look different from five years ago.”

According to Sartre, the hope is to have more of a destination that illuminates and analyzes the growing retail tech stack industry. “For us, it’s really a research piece to help the ecosystem,” he said.