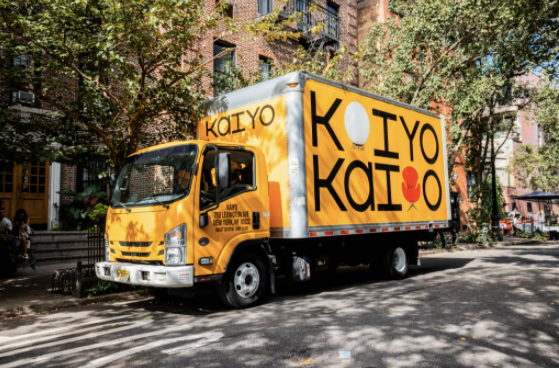 This month, Kaiyo opened its first West Coast warehouse in Los Angeles after years of operating in various markets on the East Coast. The move would allow the company to accept sellers in the area and offer its white-glove services to people in the area, making furniture delivery for large items cost a maximum of $30 from its previous $500 to $800 price tag. The expansion will also cover surrounding areas like Beverly Hills, Venice and Santa Monica, among others.

As a marketplace, Kaiyo faces a two-pronged challenge: it has to attract both buyers and sellers. Though Kaiyo operates throughout the U.S., Kaiyo only accepted products from sellers on East Coast markets until now, opening new warehouses in Philadelphia, Washington, D.C. and Baltimore since launching in 2014 in New York. This expansion, which comes on the heels of its $36 million Series B round, means people living in the Los Angeles area can now also sell items through Kaiyo, allowing it to not just grow its customer base but its network of sellers as well.

“Our goal at Kaiyo is to make great designs accessible for people in a convenient and sustainable manner,” said Alpay Koralturk, Kaiyo founder and CEO. “We have a steady march towards national expansion. We’ve seen a lot of companies try to do it really fast then crash and burn.”

People in Kaiyo’s service area who want to sell through the company must go through a multi-step approval process. Once Kaiyo accepts the furniture that sellers submit, Kaiyo will pick up the item at the seller’s convenience free of charge, inspect the quality of the piece, clean it, photograph it, wrap it and then store it in Kaiyo’s warehouse. Used furniture sellers also have access to the company’s new instant offer feature that lets them cash out with a flat fee as soon as the company picks up and accepts their item without waiting for the item to be sold.

Consumers can purchase items at Kaiyo from anywhere in the U.S., but those outside of Kaiyo’s white-glove service area, will have to pay a higher delivery fee through third-party carriers, which will be calculated at checkout. Kaiyo also requires a $350 minimum order value for third-party shipping. Buyers within Kaiyo’s service area have cheaper delivery options, starting at $19 and they can also pick up online orders from Kaiyo’s new 78,418 square-foot Chino, California warehouse.

Koralturk declined to share Kaiyo’s exact revenue figures but said the company has been growing more than 100% year-over-year for about six years. Its Series B round announced in March has brought Kaiyo funding to around $50 million.

Kaiyo’s West Coast expansion began in Los Angeles because it is one of the biggest markets in U.S., Koralturk said. In the near term, the company plans to enter more markets on the West Coast, like San Diego or Seattle.

“California is a very rich market in terms of design tastes,” Koralturk said. “It’s a huge market also in terms of just population.”

During the pandemic, retailers saw demand for furniture and home decor skyrocket, but the demand has since died down. Koralturk said this isn’t the case for Kaiyo at the moment.

“Our ebbs and flows are dependent primarily on people’s moving patterns,” Koralturk said. “June is a huge moving month for us. It is a record-breaking moving month this year as well. It always has been and it has continued to perform kind of the same way it has for us for the last five years or so.”

But when it comes to scaling, Minkow said that a challenge for a startup like Kaiyo will be maintaining the quality of its services. “They will have to make sure that they’re keeping all of that within their control and not leveraging third parties because that is where you tend to lose some of the quality when it comes to making those deliveries,” she said.

Still, Minkow said that the economic environment, where consumers are looking for discounts on quality items to stretch their discretionary budgets as the price of goods continues to rise, has allowed the secondhand furniture market to flourish.

“We are way more price-sensitive than we’ve had to be in any recent historical moment when it comes to shopping,” Minkow said. “And so the resale furniture market really aids in that.”

Along with the growing number of consumers who are making a conscious decision to make environmentally friendly purchases, Kaiyo’s Koralturk said he expects to see demand for the category.

“I think it’s going to grow at breakneck speed,” he said. “Obviously, I’m biased for being in the industry. But I think everything we’re seeing these days is pointing to that.”