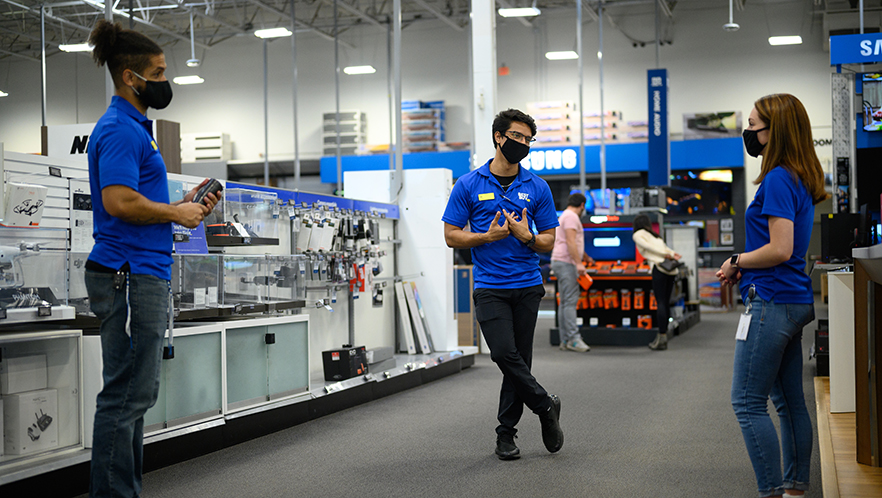 After a year of significant e-commerce growth, Best Buy executives said the company is now focused on preparing for the shift to online shopping to remain permanent.

At the beginning of the pandemic, Best Buy was quick to roll out services like curbside pickups and in-store appointments. Now, the company is focused on how to make these services more efficient fulfillment hubs, as well as how to prepare more generally for people doing more of their shopping online.

But the early moves certainly helped its recent performance During its fourth quarter earnings on Thursday, Best Buy reported that e-commerce sales were up nearly 90%, and now represent 43% of its total sales. CEO Corie Barry said that the company is projecting that next year, e-commerce will still make up roughly 40% of sales. In total, Best Buy’s revenue for the quarter was $16.94 billion, up 11.5% year-over-year, while its profit was $816 million.

Now, the company is looking at how to capitalize on this e-commerce growth in the coming years.

Barry said during the company’s earnings call that the company is preparing for a few of the retail trends that were accelerated by the pandemic to become permanent — namely, that customers will do more shopping online, and also want more control over how they want to shop. To that end, Best Buy has been focused on building out a variety of fulfillment methods. Barry said last year that Best Buy would move towards a new ship-from-store model, where a couple hundred stores were remodeled in order to serve as “hubs,” and would ship out more e-commerce orders than the typical Best Buy stores.

Today, 340 stores of Best Buy’s stores, or 35% of store locations, now handle 70% of total ship-from-store orders, Barry said. She said Best Buy is still in the process of testing out what these hubs should look like. Bloomberg reported this week that one change the company is testing out at some stores is reducing the amount of square footage dedicated to shopping to 15,000 square feet, from an average of 20,000 square feet.

Barry also said that the company is rethinking what kind of customer support its in-store employees and Geek Squad team might provide in the future, as more people buy internet-connected devices and rely more on technology services. She gave the example of how, in the past, someone might typically use Geek Squad to fix a broken laptop. But in the future, she said, Best Buy expects to get more queries about how to improve streaming capabilities, or making sure that a printer is connected to the right systems within the customer’s home. In response to the pandemic, Best Buy added the ability last year for customers to video chat with employees.

“You have more proliferation (of technology), more people upgrading more products, and more people trying to make products work all within the ecosystem of their homes,” Barry said.

Lastly, she said that Best Buy was rethinking its workforce model — which earlier this month, resulted in the company laying off 5,000 full-time employees, as it shifts more positions to part-time. In total, Best Buy had 102,000 employees at the end of 2020 compared to 123,000 at the beginning of the prior year, as the company also furloughed some jobs at the beginning of the pandemic. Still, Barry said the company is in the process of adding 2,000 part-time positions.

The biggest challenge ahead for Best Buy is that its growth is likely to slow over the next year as more people resume normal shopping habits. Best Buy said in its initial projections for next fiscal year, it expects comparable sales to either slightly decline or increase 1% year-over-year.

“A year ago, there was a surge in demand as consumers purchased IT and consumer electronics for working and entertainment at home,” said John Harmon, senior analyst at Coresight Research. “As we move through the spring, consumer purchases are likely to revert to normalized growth rates plus some incremental spending for the replacement of existing equipment.”

Neil Saunders, managing director of GlobalData Retail said in an email that Best Buy has fared better than other retailers over the past year in part because it had already built out some of the systems necessary to fulfill more e-commerce services. While the company didn’t have curbside pickup rolled out at all stores it’s offered buy online, pickup in-store for several years.

Still, Saunders said he’s noticed that some of the curbside and buy online, pickup in-store collection points at some locations are  “under a lot of stress in terms of having long lines and the stock areas being absolutely crammed full of orders,” and as such thinks changes to store formats are necessary.

In addition to setting aside more store space, Saunders said that adding more loading and shipping docks to stores,  and dedicating specific parking spaces to curbside pickups are other necessary investments to fulfilling more online orders.

“Given the changing role of stores, it is not surprising that Best Buy is reviewing how its physical locations work and how they need to be configured,” he said. “In the past, Best Buy has been good at adapting to changes and challenges in the market.”