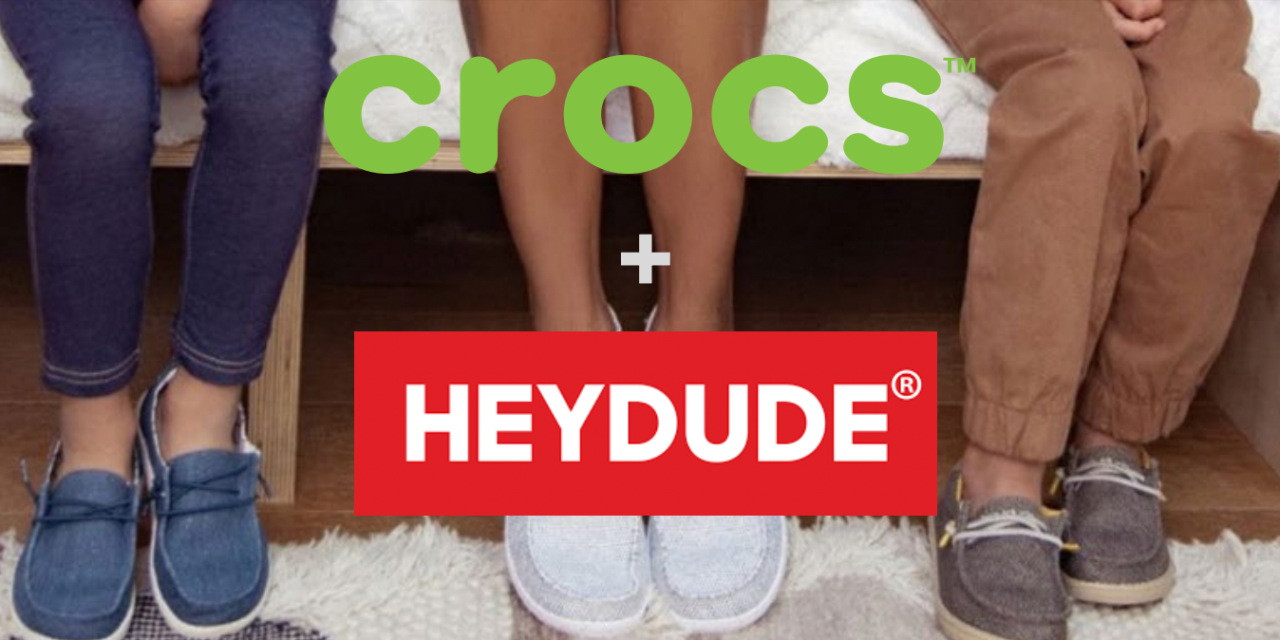 Crocs closed out 2021 with its biggest acquisition to-date, buying Hey Dude Shoes, a brand of casual canvas boat shoes and sneakers for a whopping $2.5 billion.

Crocs is coming off yet another quarter of sales success. In the brand’s most recent third-quarter 2021 earnings, revenue was up 73% year-over-year to $626 million in the quarter. Hey Dude was set to record revenue of $570 million in 2021, double compared to the year prior, said Crocs’ CFO Anne Mehlman at an investor presentation announcing the deal.

Crocs’ sales struggled between 2016 and 2019 as interest in its infamous foam clog style waned and the brand was forced to shutdown 160 retail stores. However, after an investment in buzzy collaborations and a pandemic-driven sales boost, Crocs became cool again. The brand sold 69 million pairs of clogs in 2020 alone. Now, Crocs is ready to aggressively spend in order to reach $5 billion in sales by 2026. Analysts think that growth through acquisition could be an effective strategy for Crocs, particularly as formal footwear sales return.

In order to achieve their aggressive 2026 goal, executives at Crocs outlined four strategic initiatives via a press release in September: growing its sandals category, digital sales, presence in China and marketing spend. To promote sandals in-house, the brand has expanded styles and invested in celebrity collaborations. Sandals are a popular secondary category for the brand and accounted for 20% and 13% of the brands’ second and third quarter 2021 footwear sales, respectively. Late last year, Crocs also launched a new digital brand app with VR capabilities and influencer styling content. With Hey Dude, Crocs can further expand digital sales and product diversity.

Crocs’ CEO Andrew Rees explained during the same December acquisition investor presentation that the addition of Hey Dude would help Crocs break into new footwear categories and make Crocs the second-largest player in casual footwear. Currently, clogs account for 71% of Crocs’ footwear sales — down from 76% in June. While the brand has traditionally put its focus on beefing up sandal sales, Hey Dude will provide a slate of new, diversified products. Hey Dude’s best seller is its canvas boat shoe. But the brand also sells boots, platforms, slip-ons and sneakers. With the acquisition, clogs are expected to represent 57% of Crocs footwear sales.

Digital growth plays another role in this acquisition. Over the 12 months ending in October, digital sales on Hey Dude’s site and on Amazon accounted for 43% of the Hey Dude’s revenue. Crocs, meanwhile, last reported that 37% of its most recent quarterly revenue came from an online channel.

Hey Dude was founded in 2008 in Italy, though most of its sales occur in the U.S. The brand offers casual footwear for men, women and children and prioritizes “lightweight” and “comfortable” sensibilities, according to the brand’s site. “Like Crocs, Hey Dude has a digital-first approach and high digital penetration,” said Rees to investors. “Similar to Crocs, the Hey Dude silhouette is easy to purchase online with a generous fit and no hard sizes.”

Beth Goldstein, the NPD Group’s executive director of accessories and footwear, said that in sales from December 2020 to November 2021, one in five Hey Dude customers also bought Crocs, suggesting a shared customer affinity.

“They’re both growing very strongly… and Crocs sees [Hey Dude] coming up in the space with a similar kind of feel,” said Goldstein. “Crocs may feel [acquisition] is a good way to expand their business and to help continue their growth… It’s definitely an interesting pairing.”

Rees added during the presentation that the core reason Crocs thought that Hey Dude was “an ideal fit” for acquisition was “its strategic focus on the same long-term consumer trends that are fueling Crocs, namely casualization, comfort, sustainability, and personalization.”

Strategizing after the casual apparel boom

Casual footwear boomed during the pandemic. Alongside Crocs, shearling shoe brand Uggs is making a sales comeback, with consistent year-over-year growth in 2020 and 2021. According to its parent company Deckers’ most recent earnings, the brand’s sales were up 3.6% to $761 million.

However, as consumers get antsy after months spent at home, formal apparel is back on the rise. At Nordstrom, for example, men’s formal shoes — e.g. loafers and boots — were up in third-quarter sales. At Steve Madden, meanwhile, women’s dress shoes and boots were “an outstanding category” in the third quarter, according to CEO Edward Rosenfeld.

Now, casual shoe purveyors will have to once again start competing with more formal options. “Both [Crocs and Hey Dude] have very strong growth rates right now,” said Goldstein. “The challenge is how to keep that up and make that last.”

Crocs’ Rees, for his part, told investors that Hey Dude could grow to a “$1 billion-plus brand by 2024.”

Currently, 95% of Hey Dude’s revenue comes from the U.S. As such, Crocs plans to leverage “its global playbook” to diversify the brand’s audience. Crocs’ own revenue, by contrast, is 32% international. International growth — particularly in China — is a focus for the brand: Crocs’ president Michelle Poole previously Modern Retail, “I’m most focused on how the brand comes to life across the globe.”

“In addition, we believe we will further accelerate digital growth by elevating digital capabilities, and we plan to invest to scale Hey Dude’s supply chain to gain efficiencies,” said Rees. “The Hey Dude brand has incredible potential and we are thrilled to add it to our portfolio.”